It was 2 weeks ago when I laughed out loud after Shaq asked his former teammate, 37 year old Kobe Bryant, for one small and very easy request.

“I need 50 that night,” O’Neal said to Bryant about his upcoming final game. “Can you do it? Your last game, your last home game at the Staples, can you give us 50?”

When he laughed, I was thinking he was laughing for the same reason I was, the TNT crew and everybody at home watching: because it was a ridiculous request. Comical. Ludicrous, impossible even for a man who has given us many, many, too many to recall, unreal scoring performances over the past 2 decades.

Well, the jokes on us as Kobe kept his word and did not score 50, a feat he has done 23 times in his career.

“I challenged him to get 50 and the motherfucker got 60.” Said Shaq after that motherfucker Kobe Bryant, more frequently referred to as an asshole by former teammates and opponents, dropped 60 points, 23 in the 4th, in a comeback victory against the Utah Jazz, in the FINAL game of his storybook career.

And that’s all the ever quotable Shaq had to say. For once in his life, The Big (insert your favorite nickname) was actually left speechless. And Kanye was actually smiling. And Jack Nicholson looked happy again to be sitting courtside. And birthday boy Baron Davis and Lamar Odom were back in a NBA building. And there I was sitting in Section 108, row 11, seat 10 going through a range of emotions before standing motionless as the entire Staples Center exploded around me as Kobe reached 40, then 50, then 58, then 60…60! The most points scored this season. 60! The most points ever scored by a NBA player in his final game. 60! A number no player has ever reached at Kobe’s age, including Wilt Chamberlain, who was 5 years younger when he did it.

And as I did while watching Redmond and his father finish that race together, I shed a tear watching Kobe finish his race in the same purple and gold uniform he’s been wearing since we were teenagers, then seeing him run to his wife and daughters, Natalia and Gianna, and share a fist bump explosion that I have done so many times with my two daughters, Alexis and Ava, who are close to the same age as his. 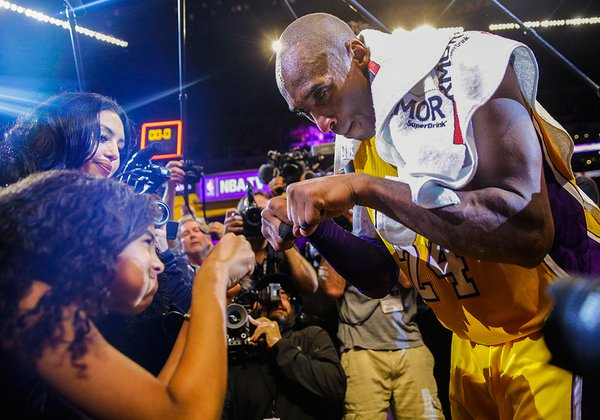 That father and daughter moment was the cherry on the top for me. It will actually be the image I will remember the most from this day and not to brag but, I FLEW IN KOBE’S HELICOPTER BEFORE THE GAME! Seriously, thanks to the good people at Nike, who not only saved Kobe from wearing another pair of hideous space shoes, I got to arrive to the game in the same seat in the same helicopter that Kobe takes to every practice and home game. You are probably asking yourself, “Did he win some type of contest or is he just one lucky SOB or is he just making this up?”

I’ll admit it does sound as fictional as a 37 year old recovering from multiple season-ending injuries and scoring 60 points in his final NBA game but it’s all true. Nike invited Ballislife to attend a special Mamba Day experience, which started with a 2 mile morning bike ride at Santa Monica Beach (Kobe loves to ride his bike), a training session with one of his trainers,Keion Kindred  (full of funny stories including Kobe doing shooting drills without a ball and saying if a shot was off or not), a visit to his favorite museum, The Broad, and then an unforgettable flight on the Mamba Helicopter, which would only rank below a ride in the Batmobile. It was a flight that had all the other lucky SOBs giddy like kids at their first basketball game. But not me. I sat in silence, reflecting on Kobe’s past 20 years, my past 20 years, and how am I going to fill this hole when this 20 year relationship ends…tonight.

I thought about that day in 1995 when I was a freshman in college and recorded, on VHS, some cocky teenage kid named Kobe Bryant battling Lester Earl in a high school dunk contest.

I thought about the day he was traded to the Lakers and recording an interview with Jerry West saying Kobe Bryant “will be able to get any shot he wants to, even in the NBA.” I thought about all the times Kobe proved those words true: When he outscored the Mavs 62-61 after 3 quarters; When he scored 56 points in 34 minutes against the Grizzlies; When he had his 81 point Mona Lisa in Toronto. I thought about all the game-winners, the underrated dunks from the frobe #8 days, the biting of the jersey, the championships with and without Shaq, I even thought about early Saturday mornings of TNBC and seeing K.O.B.E shut up a couple of bullies on the show ‘Hang Time,’ which came on between Saved By The Bell: The College Years and Inside Stuff.

Then I thought about the game from last night again. I read what other NBA players had to say about it. I read what my favorite media writers had to about it, and by far, the best thing I read was this quote from the player/legend/husband/father himself.

“The coolest thing is my kids actually saw me play the way I used to play,” he said afterward. “It was like, ‘whoa, dad.’ ‘Yeah, I used to do this pretty often.’ ‘Really?’ ‘Dude, YouTube it.'”

Thankfully, I don’t need YouTube to know this. I have memories. 20 years of great memories from a journey that is now over or as the late great Lakers broadcaster Chick Hearn would say, “the game’s in the refrigerator, the door’s closed, the light’s out, the eggs are cooling, the butter’s getting hard and the jello’s jiggling.” 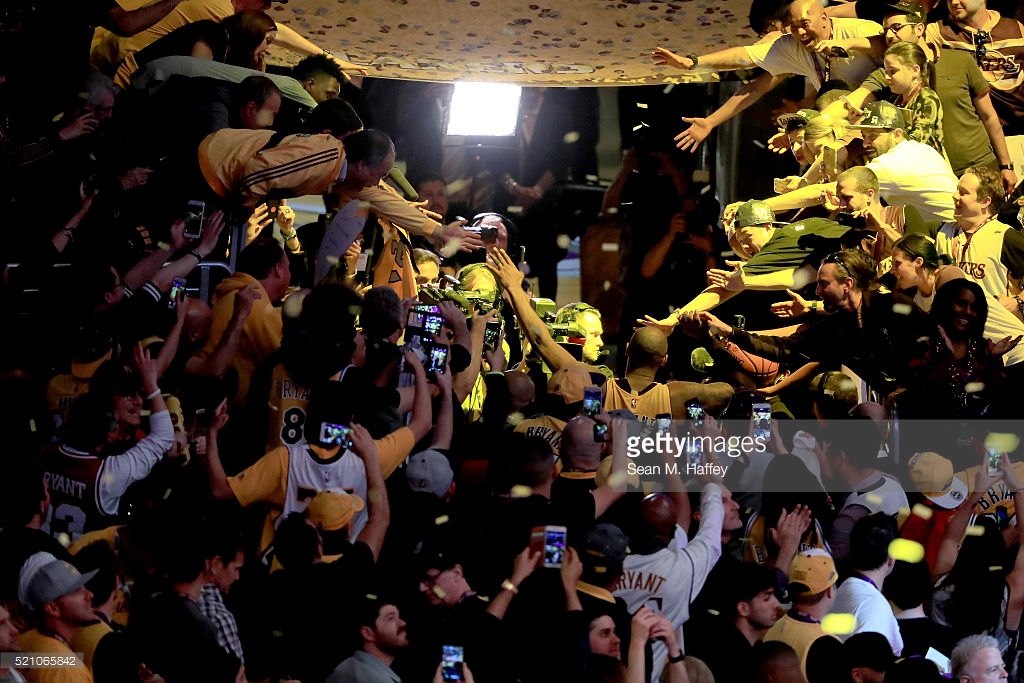