The sight of Paul George limping to the sidelines last night had most basketball fans fearing the worst but the good news is the injury wasn’t his right leg.

“Nothing serious,” Vogel said. “He got kicked pretty strongly in his calf and it caused a calf strain.”

Via The  Indy Star has the details:

“Just came off a screen and felt a pop, but they looked at it and it’s nothing more than just a calf strain,” George said, slowly. “It wasn’t a knee injury but it’s tough, you work so hard in rehab and have something else pop up. The good thing is, I know we’ve got a long summer and a lot to look forward to.”

“It’s motivation just to get back to who I was but I’m going to be smart about it,” George said. “I don’t know whether it was overcompensating being on the left or what but I’m motivated to make sure that this right leg is strong as my left, so nothing like this pops up again. It is frustrating but the good thing is I have a whole summer ahead of me and a lot to look forward to working out.”

George had foul problems for most of the night and finished with just 2 points before the 4th quarter scare.  The Pacers, needing a win for the final playoff spot, ended up losing by 12.

Thank you Memphis and all my fans!! It’s been my toughest year by far but looking forward to my greatest summer ahead! 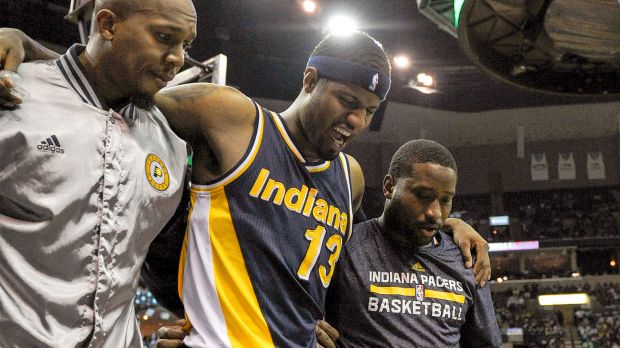