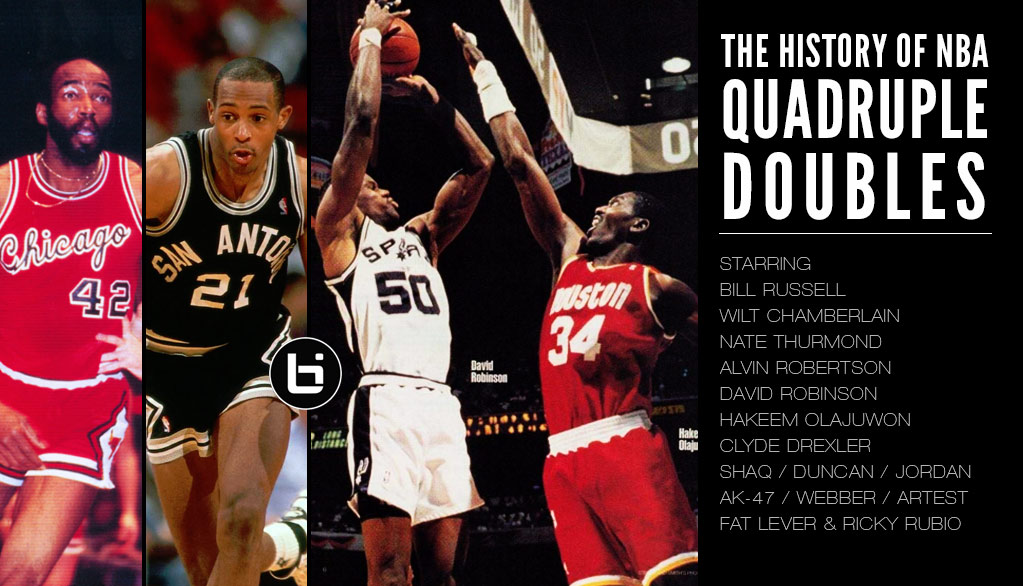 The NBA only recognizes four players and instances of the rare quadruple-double. Those players are Nate Thurmond, Hakeem Olajuwon, Alvin Robertson, and David Robinson and those instances happened between 1974 and 1990. The reason why I said “only recognizes” is because the accomplishment has been pulled off numerous times by fantasy basketball Gods Wilt Chamberlain and Bill Russell before 1973 – the year blocks and steals became an official stat.

During the 1968 season, when Wilt led the league in assists, he had a game with 22 points, 25 rebounds, 21 assists and 12 blocks! We only know about the 12 blocks in this game because his 20 x 3 accomplishment is so known. So who knows how many quadruple-doubles Wilt really had during all those countless games where not even a local newspaper writer was in attendance.

As for his nemesis Bill Russell, in 1961, the man with 11 rings pulled off one of the most shocking quadruple doubles ever and it was against Wilt: 15 points, 25 rebounds, 13 blocks and 15 steals…not assists but steals. Since the official NBA record for steals is 11, that means Russell’s unknown quadruple-double also contains an unknown NBA record. I’m positive Russell also had a few with assists but the only possible proof out there are some old next day newspaper write-ups that have never been scanned  and uploaded to the internet.

One year after the NBA started recording blocks, Nate Thurmond, in his first game as a Chicago Bull, started the season with the first official quadruple-double: 22 points, 14 rebounds, 13 assists and 12 blocks vs the Atlanta Hawks. The late Nate The Great did have an OT period to pick up a few extra apples but I’m assuming he had at least 10, 10, 10, 10 before the extra session.

The less you know about Alvin Robertson’s personal life the better. On the court, he was pretty crazy too and if you ever heard the line “punch you in the face like that kid from Detroit” from Shaq’s song “Where Ya At” with the late Phife Dawg, it’s Robertson he’s talking about.

Anyways, 12 years after Nate did it with blocks, Robertson pulled off the first and only official quadruple-double with steals: 20 points, 11 rebounds, 10 assists and 10 steals against the Phoenix Suns. This accomplishment also came during the year Robertson won the NBA Defensive Player of the Year Award.

On March 3rd of 1990, The Dream racked up 29 points, 18 rebounds, 11 blocks and 10 assists against the Golden State Warriors. Or did he? Although most websites will tell you this was the 3rd instance, the league disagreed.

Here’s what happened via MentalFloss.com

It’s not clear whether Olajuwon knew or even cared how close he’d come to the arbitrary milestone, but Rockets coach Don Chaney and team media-relations director Jay Goldberg sure did.

The pair reviewed the game tape immediately after the final buzzer and “found” what seemed to be an uncredited assist for Olajuwon in the first quarter. The team quickly issued a revised box score that credited Olajuwon for 29 points, 18 rebounds, 10 assists, and 11 blocks. Bingo! Quadruple-double achieved!

The NBA gives its statisticians a bit of latitude when it comes to determining what exactly counts as an assist thanks to the inherently subjective nature of the stat. Having team officials review game tapes and revise box scores goes well beyond “latitude” and right into “chicanery” territory, though. When the league caught wind of the revision, director of operations Rod Thorn asked if he could take his own peek at the tape.

That’s where the quadruple-double got a little less quad-y. Three days later, Thorn announced his findings. On further review, Olajuwon didn’t deserve 10 assists, and the original box score that gave him credit for nine dimes would remain the official record of the game. Thorn didn’t think much of the Rockets’ shenanigans; he publicly said, “A box score should not be changed after the fact for the purpose of achieving a statistical milestone.”

Three weeks later, against Alvin Robertson and the Milwaukee Bucks, Hakeem dropped 18 points, 16 rebounds, 11 blocks and 10 assists Rod Thorn approved of. We now had our 3rd official quadruple-double and finally one for The Dream.

Four years after The Dream, the underrated David Robinson — a man who used to have nightmares about The Dream — recorded the last official instance, when he had 34 points, 10 rebounds, 10 assists and 10 blocks against the Detroit Pistons.

Unlike his embarrassing 71-point performance (The Spurs, up by 2o in the final minutes, were fouling the other team so The Admiral could get more shots and win the scoring title over Shaq) in 1994, this statistical accomplishment deserved praise. Also worth praising was how amazing Robinson’s streak was when he had the quadruple-double.

Two years after the last instance, Hakeem’s Houston teammate (college and pro), Clyde Drexler, was involved in another Houston Rocket quadruple double controversy and yes it involved an assist. His final line in the official box score would say 25 points, 10 rebounds, 10 steals and 9 assists. If he would have been credited for a 10th assist, Drexler would also have the honor of being the oldest player to ever pull it off.

Just as forgotten as this performance was a decade earlier, Drexler had 26 points, 9 rebounds, 11 assists and 10 steals against the Bucks.

In the two-decade drought since Robinson’s instance, a few (surprising) players have flirted with the accomplishment.

Also during this time, Tim Duncan and Shaquille O’Neal had two close ones during the NBA Finals.

Here’s a list, compiled by Dan Feldman of NBC Sports, with a list of players who had at least 8 in four of the five major cats over the past 30 years.  Not included is Michael Sugar Ray Richardson, who in 1985 had 38 points, 11 rebounds, 11 assists and 9 steals in a game.