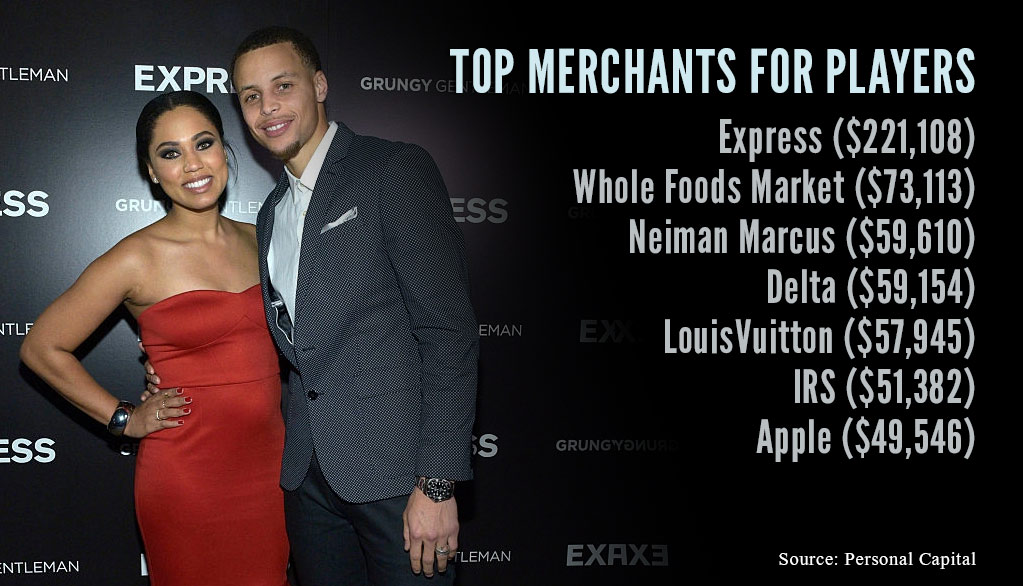 According to a recent article by The San Francisco Chronicle, the average NBA player spends $42,500 a month!

$42 grand is about 10 grand less than the average American household makes in a year. $42k is about $10k more than the average student owes after graduating from college. Basically what i’m saying is $42 stacks is a $hitload of money, but for some NBA players, it’s just enough to cover the cost of some new clothes, transportation and food.

Keep in mind, the data compiled by the league and a financial app called Personal Capital was done by tracking the spending habits of 5o random players and they didn’t release the names, so we have no idea what the average salary is for the sampled group. And for every player (I’m not going to say any names) who is willing to make it rain tens of thousands of dollars on a single strip club visit, there’s people like coupon clipping Kawhi Leonard and Giannis the Greek Freak(onomics). For every Antoine Walker, we have a financial educator like Adonal Foyle.

But you don’t want to hear about FICA, Foyle and how he saves and invests his money (but his non-profit work deserves some recognition), you want to hear about how these current athletes can spend what many people would love to call an annual income, in just 1 month.

Here’s a breakdown via the NYDailyNews of the top merchants benefiting the most.

$51k on the IRS? I hope these guys are buying nice gifts from Neiman Marcus for their accountants.

And $221k at Express? I know most players would love to shoot like Steph Curry but I didn’t know they were trying to look like him.

One other thing to keep in mind when you hear about athletes being “broke.” There’s a very big difference between most people being “broke” and “celebrity broke.” Most of these “broke” celebs still (should) have assets worth more than everything the average person has ever owned. Most of them, at almost anytime, could do a local commercial or participate in an autograph signing and make more money in a couple of hours than the average American has in their checking, savings and 401k accounts combined. Actually, the average American doesn’t even have a savings and 401k account.

Being in the marketing industry for the last decade, I’ve also seen local businesses and investment groups pay 6 figures to former (non all-stars) players just so they could say that player is a partner and/or owner. I’ve seen a local player get $40,000 to say 1 line during a 10 minute video shoot for a local commercial. I’ve also seen career bench warmers get tens of thousands just to show up at clubs and parties; The same clubs and parties where people, who make less than $42,500 a year, spend a couple hundred on admission and drinks for a night of fun. So who is actually the careless spender here? It’s not the player making millions and spending thousands, it’s the person making thousands and spending hundreds.

With all that said, $42 freaking thousand a month is a $hitload of money.