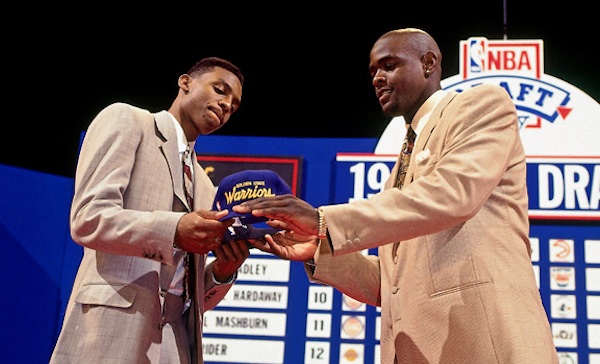 Due to a tie-breaker with the Indiana Pacers, the Orlando Magic failed to get the final spot in the 1993 NBA playoffs. Orlando fans cried as their magical season ended and the NBA cried because Shaq was the biggest story in the league that year and they would have preferred to see Shaq go for broken backboard #3 in the playoffs than watch Reggie Miller shoot a few more threes.

The basketball Gods (and maybe David Stern) made it up to everybody by giving the Orlando Magic the No. 1 pick in the upcoming draft, despite only having a single ball in a drum of 66.

Orlando fans had wet dreams at the thought of Shaq and Chris Webber being Orlando’s twin towers but that idea reportedly wasn’t so cool with Shaq and Webber. Luckily for them, during Shaq’s acting debut in the film Blue Chips, he got to know toothpick-skinny co-star Penny Hardaway pretty well and told the powers that be at the Magic Kingdom to shock the world and pass on the Fab Five star for a Scott Skiles replacement. The Magic invited Penny to a workout that left Magic GM Pat Williams calling Penny the next Magic Johnson and Oscar Robertson.

On draft night, the Orlando Magic selected Webber with the 1st pick, then traded him 15 minutes later to Golden State for No. 3 pick Penny Hardaway and a few future draft picks (1996, 1998, 2000). Orlando fans were once again crying because Penny wasn’t a household name and nobody gave a damn about picks three, five and seven years in the future.

It didn’t take long for Penny to turn those tears into cheers; In his first preseason game, Penny posterized the Rockets’ Carl Herrera and by the end of the first week of the season, it was evident that Penny and Shaq were going to be one of the most exciting duos in the league and worthy of the Magic and Kareem comparisons.

Webber did go on to win Rookie of the Year and was clearly going to be an NBA great but his rocky relationship with coach Don Nelson made it clear Webber wasn’t going to be a Golden State great unless they got rid of Nelson. During the off-season, Webber took advantage of an obsolete loophole that allowed rookies to opt out of their contracts after a year. He ended up being in a sign-and-trade deal with the Washington Bullets for Tom Gugliotta and three future first-round picks.

Just off the fact that the Warriors only got one season out of Webber and the Magic ended up with six seasons — including four All-Star and one Finals appearance — with Penny, you would probably say the trade was a steal for the Magic. Then you factor in how marketable Penny was during his prime (second to only Jordan) and it was looking like the steal of the century.

“I thought it was the greatest trade in history,” said Danny Ainge. “I thought Penny Hardaway was the best player coming out of college that year. Straight up, I thought it was a pretty good trade, and still do. And three No. 1 picks? C’mon.”

This is where the “C’mon” really gets to “are you serious?” levels.

In the summer of 94, the Magic traded Scott Skiles and the 1996 and 1998 picks to the Bullets for a second round pick in 96 and their 98 pick. The Bullets then traded the picks, a 2000 pick and Tom Gugliotta to the Warriors for…Chris Webber.

If the Magic still had this pick, can you imagine a backcourt of Penny and Kobe? It probably wouldn’t have worked out and supposedly Penny once blew off a high school Kobe after a Magic game. Ironically, it was Shaq that ended up being friends with the high school star because he remembered how mad he felt when David Robinson blew him off when he was that high school visitor in an NBA locker room (Shaq later admitted he made this story up).

The Warriors drafted future Rookie Of The Year Vince Carter with the 5th pick in the 98 Draft and then traded him to the Raptors for No. 4 pick Antawn Jamison.

As for the Magic, with the 13th pick they got from the Bullets, they selected Keon Clark, who never played a minute for Orlando and is currently serving an eight-year jail sentence.

Seven years after the trade that started it all, the Orlando Magic used their final pick from the deal to select future Rookie of the Year Mike Miller with the fifth pick.

Shout out to Josh Eberley for reminding me how insane this trade became.