Thanks to a new TV deal which caused a $24 million salary cap increase, NBA teams were allowed to give out jaw-dropping huge contracts like Oprah giving out cars yesterday. The contracts offered to the likes of non All-Stars and Cavs bench riders had most people scratching their heads while the offers All-Stars and in-demand players caused a few heads to explode.

The deal that caused the most explosions was the one All-Defense 2nd teamer Mike Conley received from the Grizzlies: 5 years for $153 million!  The deal tops Damian Lillard’s $140.2 contract for the title of biggest in NBA history. It also makes him just the 3rd player (so far) with a $30 million/year deal.

Before you compare Conley to the just mentioned Hall of Famers, let’s let Kevin Draper of Deadspoin backup and explain why team owners are acting like Oprah.

The competition (the demand) for players is higher than it has ever been, but the supply is the exact same.

And (money) needs to be spent, because there is a salary floor. As part of the Collective Bargaining Agreement, teams must have payrolls that constitute 90 percent of the salary cap. By the end of the season, teams must have $85 million worth of contracts on the books. For comparison sake, that floor—the very least amount a team must spend—is more than 21 teams spent on their rosters last season. So even setting aside how much teams might want to spend on players, most teams have to.

But along with the TV money, the biggest reason good players are getting great contracts is because the NBA doesn’t remotely resemble a free market, as the CBA has a number of distorting effects. Besides a salary cap, there are also maximum salaries—35 percent, 30 percent, or 25 percent of the cap depending upon tenure. The biggest contract any team can sign Durant to is $114 million over four years, but if that wasn’t capped, somebody would furnish a deal worth $160 million over four years, or maybe $180 million. By some calculations, James was being paid $25 million less annually than he was “worth” in Miami.

Now let’s Zach Harper (@Talkhoops) of CBS Sports explain why Mike Conley got paid like Mike Jordan before J.J Redick goes off on you.

This is how the market works in a world with a salary cap and max contracts. Conley’s max is a percentage of the cap based on his experience in the NBA and includes certain raises negotiated into the Collective Bargaining Agreement. Conley is a top 8-10 point guard in the NBA, an important position in today’s league. Put any of these top point guards on the free agent market this summer and they’d get the five-year max offer from their incumbent teams. Conley is one of the best defensive point guards around. He put up 15 points and six assists, despite battling injuries this season, to go along with that defense. If you don’t offer up the five-year max to these players, you risk losing them.

Memphis didn’t want to lose Conley. That’s how he got paid. It’s not crazy. It just sounds funny because of the timing. You’ll notice almost all of the biggest contracts in NBA history have happened this year.

I know. I know. Even with those explanations it just sounds crazy for a guy the average sports fan has never heard to be getting paid as much as the biggest paydays for 2 of the biggest names in sports history. But it does make sense.

Let’s compare the deals to the box office numbers for films. If you look at the highest grossing films of all-time, you will see a ton of mediocre (Jurassic World, Avengers: Age of Ultron, Minions) and just awful (Transformers and Pirate sequels) films in the top 20, while most of the Top 100 films of all-time fail to break the top 100 and even 500 box office list. The reason why is because of inflation, more theaters, higher theater prices, multiple versions (3D, Imax) of films and way more screenings of each movie – big blockbusters will often get up to 30 showings during a Thursday night special screening; this is the equivalent of an entire week of screenings for a blockbuster at the average theater 26 years ago. This explains why Star Wars: The Force Awakens is the 3rd highest grossing film of all-time and the 1977 original is #63 . But if you adjust for inflation, Star Wars is now #3 with almost a billion more than Force Awakens.

So instead of putting down guys like Mike Conley for getting paid like Mike Jordan, but not being close to Mike Jordan, just think of them as Star Wars sequels and Jordan as the original blockbuster that spawned the sequels. 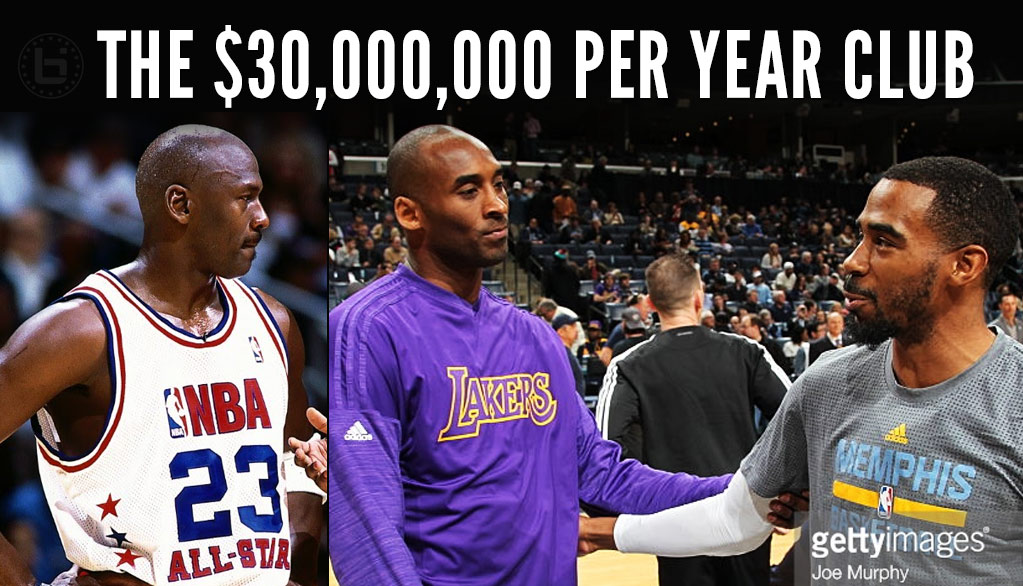