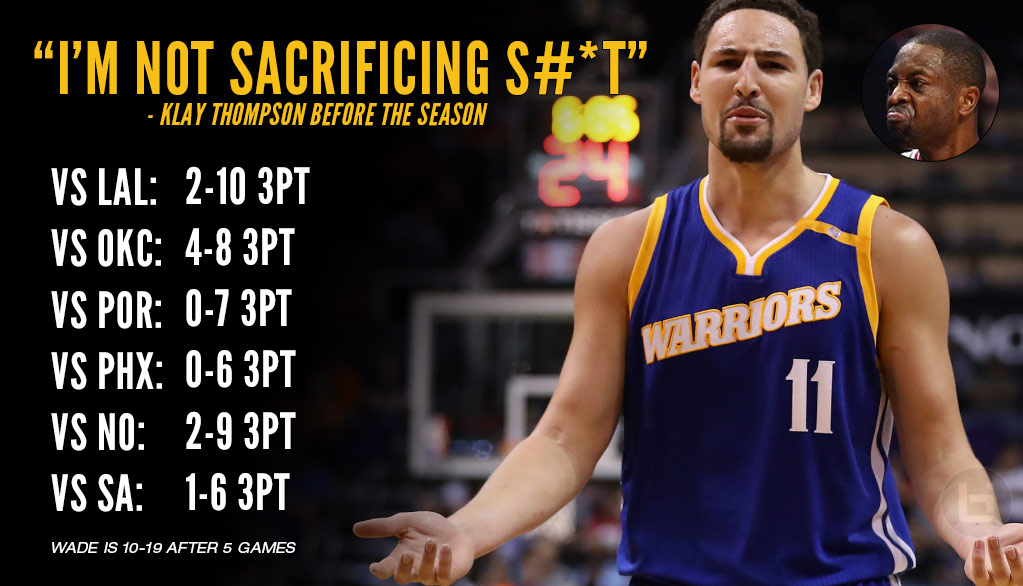 Remember back in the summer, when Klay Thompson had this quote about “sacrificing” shots because of the arrival of Kevin Durant?

“I feel kind of disrespected that people keep using the term sacrifice to describe me and describe us,” Thompson told The Vertical. “We all want to see each other do well. But I’m not sacrificing shit, because my game isn’t changing. I’m still going to try to get buckets, hit shots, come off screens. I want to win and have a fun time every game we play.”

Well, he’s not sacrificing shots but after 6 games, it’s obvious his game has been affected and he’s definitely not having fun every game.

After starting the season just 3 for 28 from downtown, Thompson found his shot against the Thunder on Thursday, making 4 of 8. Then less than 24 hours later, against the Lakers, Klay lost it again and connected on just 2 of 10 from 3, meaning he’s now just 9 of 46 and shooting .196 from 3 this season.

I do think Klay will be just fine and by the end of the season he will be one of the leaders in 3-pointers made. But first, he needs to go to Chicago and get his shot back from Dwyane Wade, who has more 3-pointers after 5 games this season than his entire total from last season.