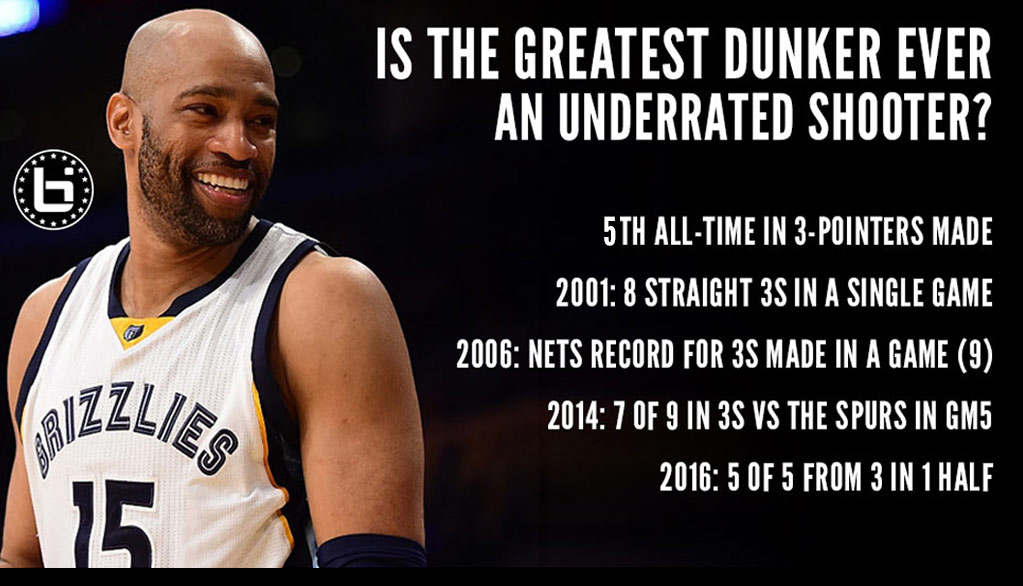 So every time Vince Carter dunks, people have to say he’s “turning back the hands of time.” But when the 40-year old goes 3 for 3 from downtown, people don’t say $#*t.  Why is that? Is it because he’s such a great dunker people don’t remember or realize how much of a 3-point threat he was and still is?

Did you know Vince once hit 8 consecutive 3-pointers in a playoff game back in 2001?

Did you know Vince set the Nets franchise record for 3s when he hit 9 in a single game back in 2006?

The only players in NBA history with more 3-pointers than Vince are Paul Pierce (2137), Jason Terry (2203), Reggie Miller (2560) and Ray Allen (2973) aka the 2K Threes Club. But on Wednesday against the Nuggets, Vince Carter joined the elite company when he scored 14 points, dished out 6 assists, grabbed 5 rebounds and made all 3 of his 3-point attempts in 26 minutes off the bench. The 2nd of those three 3-pointers put him in the 2K Club.

With all that said, I still don’t think many people consider Carter a “shooter” or will mention his name in conversations about the best shooters in the league even though he has had some memorable recent 3-point performances. Back in 2014, he connected on 7 of 9 3-pointers in Game 5 of the playoffs against the Spurs. This game isn’t remembered much because the Mavs lost but everybody remembers his game-winning 3 from Game 3 of that series.

So, yes, Vince Carter is the greatest dunker ever and NBA fans should be reminded of this fact on a daily basis, but I think the man deserves some credit for all of the damage he’s done to teams from beyond the 3-point line.