Back in March of 2014, the internet had a field day when the Mailman Karl Malone appeared on TV with a flip phone.  The jokes obviously didn’t bother the 2nd (?) greatest power forward ever because it’s a year and half later and he’s still pulling that flip phone out in public. That public appearance was at the LSU and Syracuse game on Saturday where his son, LSU’s KJ, was playing.  ESPN cut to the 2x NBA MVP and his wife a few times and every time they did the internet cracked up at his old man dance moves and older phone.

I personally think flip phones are cool and stand behind what I said last year:  I miss how over-dramatic you could be with old school phones.  You can’t slam a smart phone but you could slam shut a flip phone or slam a rotary phone and look cool after cursing somebody out.  No matter how hard you push that end button on your smartphone, it just wont look as dramatic.

I bet you don’t care and also bet it doesn’t surprise you that the Mailman still uses a flip or that his former partner in crime also has one. 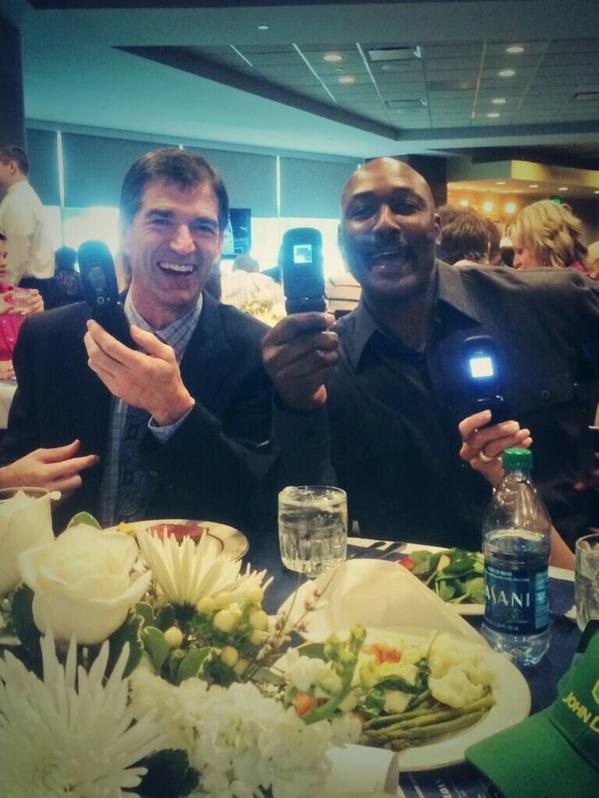 Speaking of Malone who I feel is often unappreciated by today’s generation because of his lack of rings.  It was cool to see him get some recent shout outs by Kevin Durant and Shaq.  In a recent interview with Durant, the MVP listed his all-time starting five (Magic, Kobe, MJ, Duncan and Shaq) and said it was a tough decision to pick Duncan over Malone.

Last week, Shaq was also asked to give his top five and he did pick Malone over Duncan.  He also picked Bill Russell over himself and of course had Dr J over Larry Bird which isn’t a surprise since Shaq believes Erving is the GOAT.