Most of us couldn’t wait for 2016 to end. And as Mariah Carey ended the year by giving New York one of the worst New Years eve performances ever, James Harden had one of the best performances in NBA history against the New York Knicks: Career-high 53 points, career-high 17 assists and 16 rebounds with a career-high 8 threes.

“It was like NBA 2K numbers,” Said Brandon Jennings, who had a season-high 32 for the Knicks. “I just told him afterward to just go and get the MVP and keep balling and doing what he’s doing.”

The stat line from fantasy basketball heaven was the first 50/15/15 game in NBA history and the 53 tied Wilt for most points ever scored in a triple-double.

“He’s one of the great players of all time. He ranks right up there with the best,” Rockets owner Leslie Alexander told ESPN. “I mean, nobody has ever done this before. The other team is playing hard and doing everything they could to stop him, and they couldn’t. He’s a fantastic player.”

And after contributing 95 of the Rockets 129 points in the win, he dressed like a Priest and talked about baptizing the Knicks and how blessed he feels to be on a Rockets team that just tied the franchise record for most win in December.

“When I look at it, it is unbelievable,” Harden said. “This season so far has been unbelievable. The chemistry, the wins feel really, really good. Just the vibe around here helps for us to go out on the court and have fun with each other.” 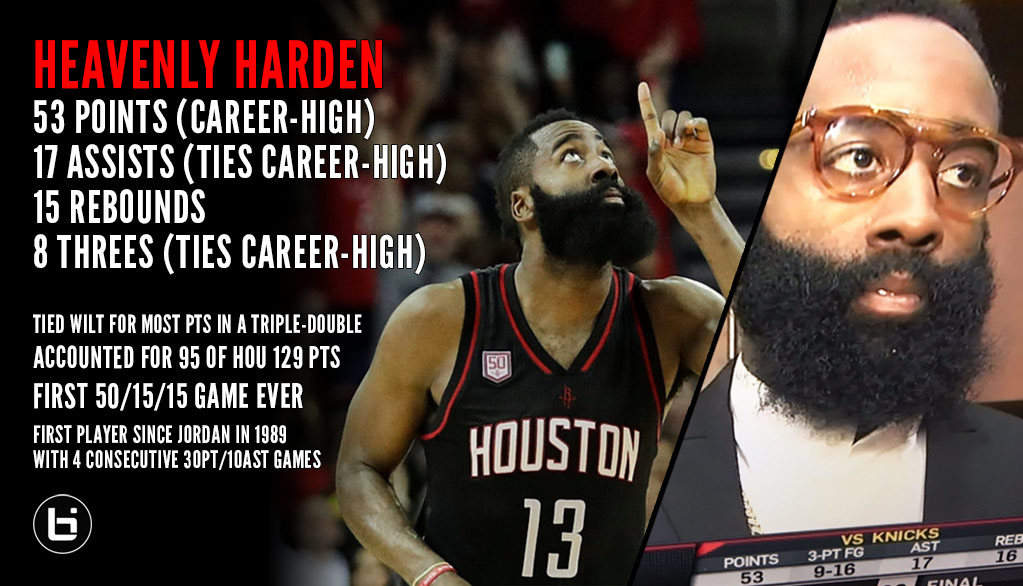