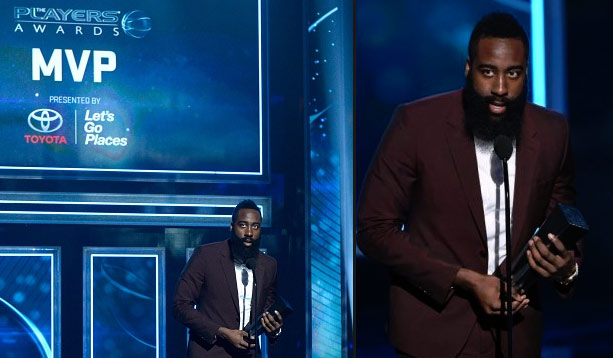 NBA MVP and Champion Steph Curry was finally beat by James Harden and it was his peers that made it happen. On Tuesday night, at the first annual NBA Players Choice Awards, the bearded one was selected as MVP over Steph Curry , LeBron James and Russell Westbrook.

“I want to thank God, thank my mom, my family and friends for all the support, the continuous support,” Harden said. “I want to thank BET for this beautiful event. To the NBA Players Association, Michele Roberts for giving players a voice to speak their minds, and then just the players, the peers, I appreciate this vote. It means a lot and I’m really thankful for it.”

But don’t feel bad for Curry who won just about everything you could this past season and was just blessed with another daughter earlier in the month. Curry won ‘Top Clutch Performer’ and ‘Hardest to Guard’ over Harden, James and Westbrook.  So Curry was 2-1 against Harden on Tuesday.