There’s so many amusing things about this clip of Reggie Jackson’s layup attempt. The least amusing to me is the ball sitting on top of the rim for a bit. We have all seen this happen a million times…well, maybe not Jeremy Lamb who looked like his favorite artist just walked into the room. 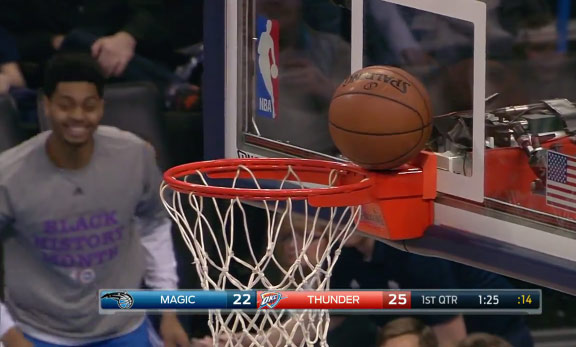 What else was amusing was watching Andre Roberson push Evan Fournier and Nikola Vucevic out of the way to get position for the rebound as it started to move and then Russell Westbrook, who was just chilling at the free-throw line, ending up with it.

But the amusement doesn’t end there, midway through the 4th quarter with the Thunder up by 18, Lamb snubbed Westbrook of some dap and Russell didn’t seem to appreciate that Lamb was more excited about a ball on top of the rim than his monster triple double.

This clip reminds me of the time Noah got mad at Tony Snell for not giving him a chest bump.