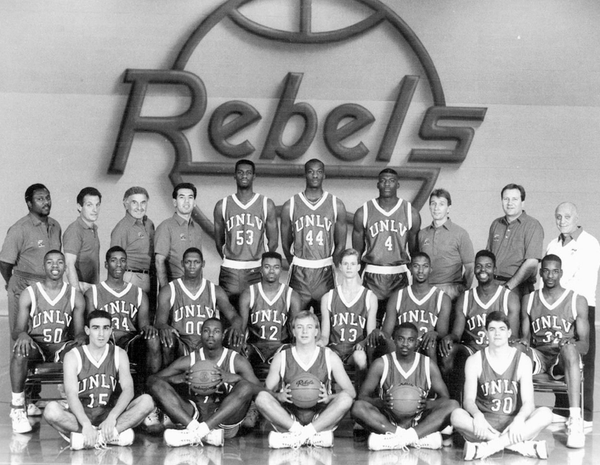 The first college team I ever liked was the 1990 UNLV Runnin Rebels. 25 years later, I still consider that team to be the most exciting college team ever –  yes, more than the Fab 5!

Although I haven’t been a big fan of UNLV over the past decade or so, I was a huge fan of players like JR Rider, Keon Clark, Shawn Marion and of course remained a fan of the man behind it all – Jerry Tarkanian.

In honor of Tark the Shark, who passed away today, here’s a video tribute we made for him at the 2012 Tarkanian Classic.

And here’s a couple of posts made by former NBA players about Tark, followed by a few videos old school UNLV fans should enjoy.

RIP to my college coach ‘TARK’….We love you sir…I will never forget you and the love you had for black kids and student-athletes in general…the realest coach ever..after Larry left you gave me the keys to the city…‪#‎thatsoursecret‬#connected#UNLV4LIFE…I have to mention this he told me in his office one time if sweet pea(Lloyd Daniels)calls while your on the phone accept his collect calls..he looked me in the eye and said I love that kid…at the time Lloyd was in Jail..all he had was Tark and coach use to take care of him…coaches today don’t have that love or heart to do that…when I played for him he would say it’s us against the world..‪#‎EasyRider‬

I remember getting butterflies before one my high school games at Glendora High. I ran out of the locker room into a jam packed gym and I see many college recruiters. But there’s one head coach I admired and respected highly sitting there. I knew I had to have a great performance. I’m sure this man had the same impact on a lot of other youngsters, especially those who needed a second chance. If is wasn’t for this man, there would be a lot of young men that would have been lost. THANK YOU COACH JERRY TARKANIAN FOR BEING YOU! FOR GIVING SECOND CHANCES! FOR LOVING YOUR PLAYERS LIKE THEY WERE YOUR OWN KIDS. Much LOVE and RESPECT to you and your family. Rest In Peace my friend. Thanks for the memories and Thanks for recruiting me. Love you Coach Tark!
–Tracy Murray & The Murray Family