I guess the refs thought a taunting tech in the opening minute, when the score was just 4-0, would be too impactful at  a later point, so they let this screaming by Noah in Mozgov’s ear slide. Maybe Noah wasn’t taunting Mozgov at all and he was just screaming out of excitement from the dunk…or maybe Noah heard about Mozgov’s answers before the game and took it personal.

Mozgov was asked if he thought Joakim Noah was one of the NBA’s better offensive rebounders: “No.” Reporter then asked, top 10? Timo: “No”

Noah would eventually end up with a tech in the game and also got an earful from Tristan Thompson who repeatedly called Noah a pu$$y without receiving a tech either. I guess the refs didn’t want to make any calls that would impact the game…never mind, they ejected Taj Gibson for “kicking” Delly. 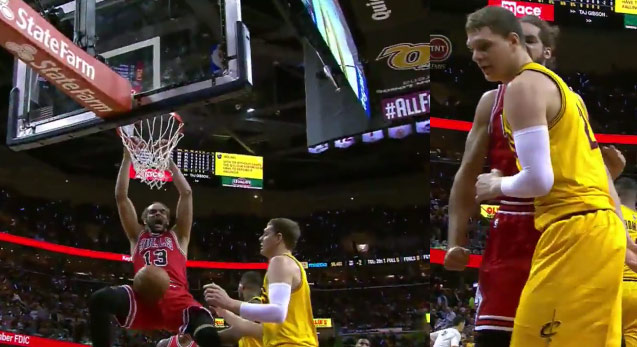