It was only fitting that 5’4″ Kevin Hart videobombed Joel Embiid’s postgame interview because The Process dominated the Lakers on Wednesday night the way a grown man would dominate a little kid on a low rim in the front driveway. He dominated the Lakers…well, like he dominated DeAndre Jordan and that other center (Willie Reed) Embiid doesn’t remember at Staples just a couple of nights earlier.

After the show, the Social Media and Trolling God, who once said “Fuck LaVar Ball” on Instagram, took another shot at LaVar by posting a pic of him scoring on (No-Show) Lonzo Ball and putting “LaVar, Fars, Iran” as the location and “WHAT A NIGHT!!!!!” as the caption. 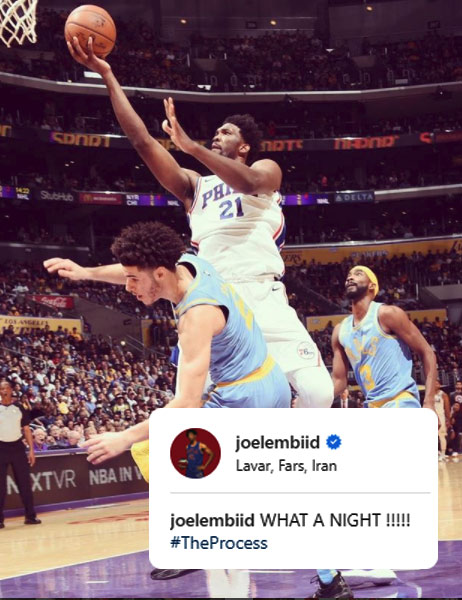 Embiid also gave a special shout out to his “rival” Hassan Whiteside during a postgame interview.

“I wish I could have had the quadruple-double with blocks, shout out Hassan Whiteside.”

If that wasn’t impressive enough, Embiid’s 70% shooting was the best among the five.

The reason why I only went back 30 years is because Wilt Chamberlain has 14 instance of 40 & 15 against his former team, which includes these ridiculous stat lines: