“People always talk about mishaps in the N.B.A. finals. To this day, people bring it up. You can’t get away from it, but it doesn’t stop you from living.” – John Starks

In game 7 of the 1994 playoffs between the Knicks and Rockets, All-Star John Starks missed 16 of 18 shots including all 11 of his 3-point attempts!

Despite playing eight seasons with the Knicks and being the all-time leader in made 3-point goals for the franchise, a lot of New Yorkers will still bring this game up as soon as you mention Starks’ name. Never mind how well he played in the other games, especially GM6 when he scored 27 points (16 in the 4th quarter) and shot 5 of 9 downtown. Actually, those same people who complain about GM7 will probably bring up the final play of GM6 when Starks had a three blocked by Hakeem and the Rockets came away with a two-point victory. My response to them is Starks was fouled by Olajuwon — which would have been his 6th — on the final play.

But the foul wasn’t called and memories of GM6 have faded and/or been erased by the anniversary of GM7.

Here’s what Coach Pat Riley had to say about John after the infamous game.

“All the critics and the naysayers that looked hard at that and criticized the fact that John was still in the game don’t and did not, take into account that we would have never gotten to Game 7 if it wasn’t for John. In Games 4 and 5, he had double-digit fourth-quarter performances. In Game 5, without him getting 11 points in the fourth quarter, we wouldn’t have won. In Game 6, he had 16 points in the fourth quarter. He was really, really playing well in fourth quarters, making big shots and making big plays.”

Starks did get a bit of personal revenge during the next season when the Knicks visited the Rockets for their first regular season meeting: Starks scored 22 points, dished out 7 assists and even dunked on Hakeem (1:07). But Hakeem and the Rockets had the last laugh again. The Knicks were eliminated in the 2nd round by Knick Killer Reggie Miller and the Rockets somehow made it to the NBA Finals, swept the Orlando Magic and became Clutch City with back-to-back championships.

In GM2 of the 2015 NBA Finals, MVP Steph Curry broke the 21-year-old record set by Starks for most missed 3-pointers in the finals when he went 2-15 from downtown. But lucky for Curry, who shot 5 of 23 from the field in GM2, the Warriors had more games left to play in the finals and would go on to win the NBA Championship without the need of going to a GM7. 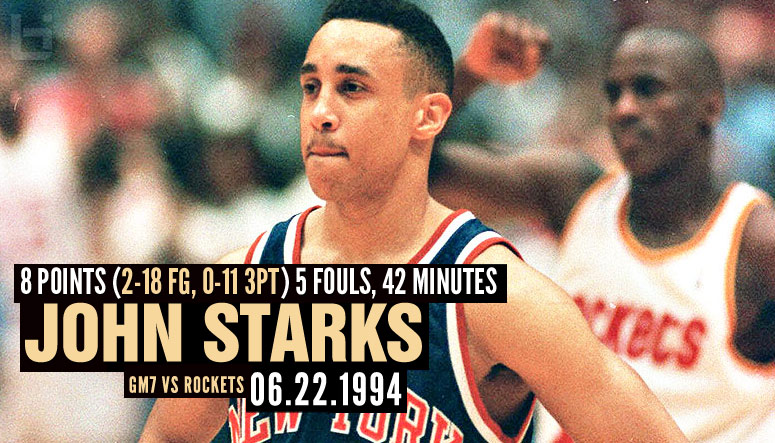 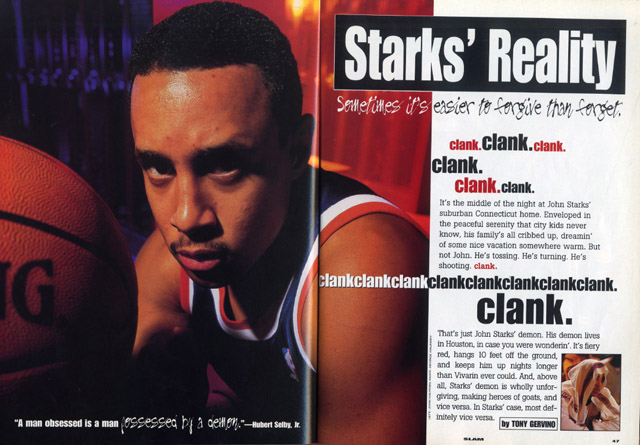