In a game that was in the balance heading into crunch time, Josh Jackson made the clutch plays to lead 1 Nation (Mich.) to the Las Vegas Fab 48 17U Invitational title. The Georgia Stars (Bigfoot Hoops Las Vegas Classic) and Team Loaded Virginia (adidas Summer Championships) also win major 17U grassroots titles in Las Vegas during final July NCAA recruiting period. 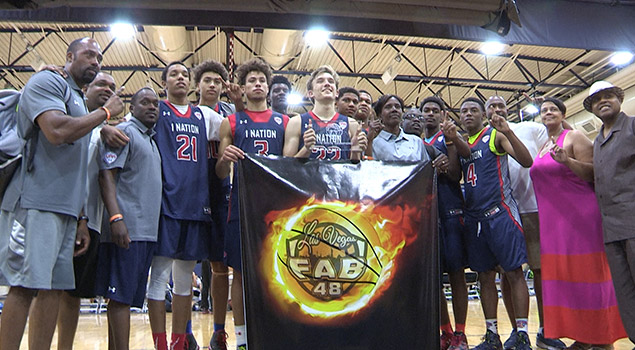 BTI Select (Calif.) came into the Las Vegas Fab 48 major division title game riding a wave of confidence because of its hot outside shooting Sunday morning leading up to its championship encounter with 1Nation (Mich.). After all, BTI shot the lights out in quarterfinal and semifinal wins over Canada Elite (46-45) and MWA Elite (86-81), respectively.

The upstarts advanced behind a 3-pointer by Abod Oses, a 6-foot-5 2015 prospect from San Gabriel (Calif.), with seven seconds remaining to knock off Canada Elite and by making 15 3-pointers in the win over MWA Elite. BTI didn’t shoot quite that well versus 1Nation, but was in position to complete an incredible run through the championship bracket with the game tied at 38-38 with 11 minutes remaining.

Over the final 10 minutes of the second half, 6-foot-8 big guard Josh Jackson of 1 Nation took charge of the game on both ends to lead his team to a 56-49 win. Jackson grabbed some big-time defensive rebounds and on the offensive end created off the dribble or hit clutch jumpers — even though the defense knew he was the focal point of 1Nation’s attack.

Jackson, one of the nation’s top rising seniors who spent his junior season at Prolific Prep (Napa, Calif.) with rumors swirling he may be on the move for his senior season, hit a 3-pointer to give 1Nation a 41-40 lead. After BTI’s Miye Oni, a 6-foot-6 2015 prospect from Viewpoint (Calabasas, Calif.), hit a 3-pointer, Jackson answered with a conventional 3-point play to make the score 52-46. In between hitting three important free throws in the last two minutes, Jackson grabbed three defensive rebounds. In the second half alone, Jackson had four blocked shots and nine rebounds.

1Nation didn’t win another any tournaments this summer and for Jackson, he joins an exclusive list of top nationally-ranked players who have led their travel ball team to a major Las Vegas summer tournament championship in recent years.

“They were a good team and we knew we had to play team ball,” said Jackson, who finished with 22 points, 14 rebounds and four blocks and was named Fab 48 most outstanding player. “It’s an honor to join the names of players who have won championships. It’s a great tournament and it’s humbling to even be mentioned with those names.”

For 1 Nation, the tournament win was vindication of sorts after the Canada Elite and MWA Elite teams BTI defeated in Las Vegas fared better on the Under Armour Association circuit. Team Canada advanced to the UAA championship game whereas 1 Nation lost in the opening round.

“It feels good, but it wasn’t like we lost by a lot…they were close games,” Jackson said.

Also having a big game for 1 Nation was 6-foot-5 2016 prospect Arguster Daniels from Kalamazoo Central (Mich.) with 15 points.

In the semifinals, Jackson had 20 points in a 66-65 overtime win over We R1 (Pa.), a team that also advanced to the semifinals of the Under Armour Association finals during the second July viewing period.

After Team Loaded Virginia and Team Loaded North Carolina advanced to the finals of the adidas Uprising Creators Cup, a mini-tournament within the Summer Championships created for the event’s top 17U teams, there was a good chance a travel program named “Team Loaded” was going to win the 17U Gold bracket.

That program turned out to be Team Loaded VA, which staged a big comeback to defeat the Mass Rivals, 76-74, in a ESPNU televised game.

The outcome wasn’t decided until Wenyen Gabriel of Mass Rivals, a 6-foot-9 2016 power forward out of Wilbraham & Monson Academy (Manchester, N.H.), missed out on an opportunity to send the game into overtime at the charity stripe. Missing two of six free throw attempts was about the only thing Gabriel did wrong all week in Las Vegas, as he was one of the week’s top performers in all three major Vegas tournaments. Gabriel, who was recently offered by Kentucky, finished with game-highs of 21 points, 13 rebounds and three blocked shots.

Team Loaded VA, which trailed by double-digits for a majority of the championship game, easily defeated Kansas Pray and Play Players in its semifinal contest 92-65. Once again offensive balance was key as five players scored in double-digits. The Mass Rivals downed Team Loaded NC in its semifinal, 71-54. Great team defense and the 20 points, seven rebounds and four steals of Gabriel were the keys to victory.

It was an impressive summer for the Georgia Stars. The grassroots program from the Peach State captured the prestigious Nike EYBL title at the Peach Jam in Augusta, Ga. and completed the championship double dip with a 77-63 victory over the Mac Irvin Fire (Ill.) in the 17U Platinum Elite title game of the Bigfoot Hoops Las Vegas Classic on Sunday afternoon.

Trent Forrest, a 6-foot-4 2016 prospect out of Chipley (Fla.), paced the Georgia Stars with 24 points in the title game. In the semifinals, everything 5-foot-10 2016 guard Nick Hopkins was throwing up went in. The Sprayberry (Marietta, Ga.) product nailed six 3-pointers en route to 27 points in the 84-60 win over the Oakland Soldiers. Wendell Carter, one of the nation’s top 2017 recruits out of Pace Academy (Atlanta), added 17 points. Carter had 13 points and 13 rebounds in the title game.

Mac Irvin Fire received standout performances all week from Miles Bridges, a 6-foot-7 combo forward who attends Huntington Prep (Huntington, W.Va.) and is one of the nation’s top 10 prospects in the class of 2016. The powerful and agile Bridges scored 26 points in the loss to the Georgia Stars. He went for 28 points in a 72-63 semifinal win over Seattle Rotary and was arguably the most impressive player we saw all week at all three NCAA-sanctioned events.

Before Sunday, it looked like that player was surely Marvin Bagley III, the 6-foot-10 rising sophomore from Corona del Sol (Tempe, Ariz.), but the gap between him and Miles (and anyone else for that matter) shrunk when his We All Can Go All-Stars 2018 club was shocked, 77-62, in the 16U Invitational semifinals by Wisconsin United at the Las Vegas Fab 48.

Wisconsin United lost in the Fab 48 16U title game, 43-42, to the Indy Hoosiers on a 3-pointer at the buzzer by Zach Gunn, a 6-foot-6 rising junior from Hamilton Southeastern (Fishers, Ind.).