The biggest criticism on Josh Smith has always been his fondness for the 3-point line and during the 3rd quarter of the Rockets game against the Hawks last night, Smith hit a 3 against his old team and then told them to hush which sent the booing crowd into a frenzy.

Early in the 4th quarter, Smith hit another 3 and once again put his finger to his lips to tell the Hawks fans to hush. The 3 gave the Rockets a 12 point lead with 11 minutes in the game….then the Rockets fell apart and were outscored 32-15 in the final period. The Hawks ended up winning by 8 and a not-so-happy Smith talked about his warm reception after the game.

“All I’ve been doing was positive things in the community and with the basketball team. I mean those fans are fickle, very fickle. And you know, bandwagoners, so it really doesn’t mean anything to me.” 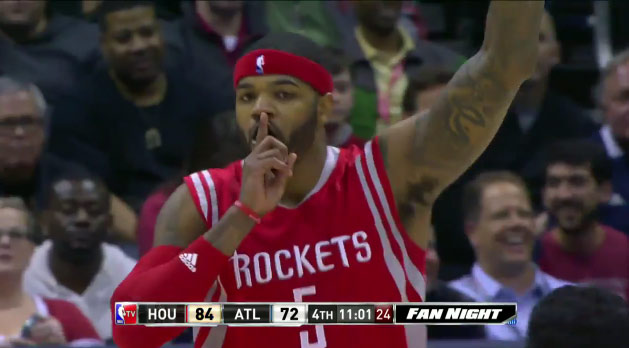