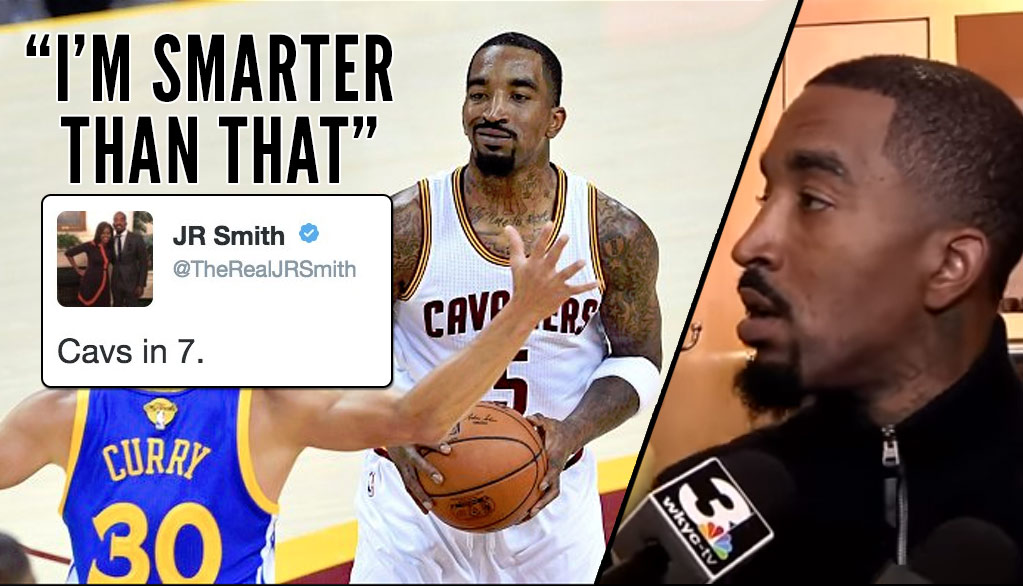 Just minutes after the last-minute collapse and loss by the Cleveland Cavs in Game 3, a “Cavs in 7” tweet was sent by J.R. Smith’s official twitter account. It was quickly retweeted tens of thousands of times until it was deleted. We all assumed LeBron James heard about the tweet, made Smith delete the tweet, then threw his phone in the toilet the way Kevin Garnett used to do young teammates on their phones in the locker room.

According to Smith, who scored 16 points in Game 3 after scoring just three points in Games 1 and 2 combined, he didn’t post the tweet we all were hoping (and probably still believe) he did.

“I got out of the shower and my phone was buzzing. I did not tweet that,” Smith told Cleveland.com‘s Doug Lesmerises. “I’m smarter than that.”

I’m not calling Smith a liar but of all the crazy things that a hacker could have posted, “Cavs in 7” seemed like a wasted opportunity and something we actually believe the always-confident Smith would tweet.

“Really?” Smith responded when asked if the tweet was used as inspiration. “I do believe. But I didn’t tweet that. I would be much smarter than that to tweet that at literally 12:04, right after the game.”

As expected, Smith was roasted by the internet and the ‘Inside the NBA’ crew for the deleted tweet.

“I’m going to call my financial people and get every dime I got together and I’ll take that bet.” Barkley said. “I’ll borrow money from Shaq too. C’mon man.”