“Nurkic Fever” is spreading in Portland. Before Thursday night’s game against the 76ers, the recently acquired Jusuf Nurkic had 17+ points in four consecutive games. On Thursday, the 22-year-old-seven-footer put up a monster line of 28 points, 20 rebounds, 8 assists and 6 blocks! Every one of those numbers was a career-high for Nurkic and the fantasy God line was one the NBA hasn’t seen since 1986, when the 76ers’ Charles Barkley did it. Since 1983, only KG, Hakeem The Dream, The Admiral and Barkley have had 28/20/5/5 games and Nurkic was the only one to do it in less than 40 minutes (38).

“That’s as dominant a performance as we have played against this year from an interior player,” 76ers coach Brett Brown said about Nurkic. “Twenty rebounds and 28 points. That’s a dominant effort.”

The beast was a little more modest sounding when asked about his dominant performance.

“Nah, I’m gonna stay on the ground, because I know what I’m capable of,” he said. “I don’t like to talk about myself, I’m gonna show it on the court.”

He was also shocked to see the immediate response from family and friends following the game.

“Nobody’s asleep,” he said. “I’m surprised nobody’s asleep. Texting me. Calling me. Right now. I’m like, ‘OK, I see.’ So I’m happy. I’m definitely happy to be on the court and healthy and enjoy the game. It’s all about that.”

Also worth mentioning about the happy and healthy former 16th pick by the Bulls is he made 10 of 13 free throws in the win and is shooting 75% from the foul line in Portland after shooting a little less than 50% in Denver this season. 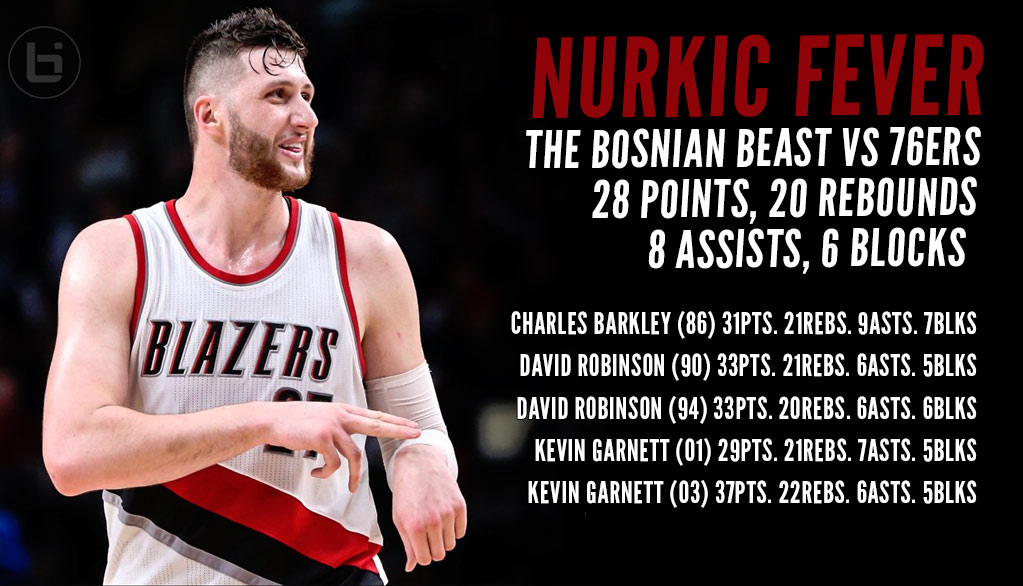