#1 pick Karl-Anthony Towns joined some elite company, including former #1 picks Shaq and David Robinson, after he put up 17 points and 12 rebounds in a win against the Hawks on Monday night.  The double-double was his 4th in his first 6 games of his NBA career which placed him behind just Shaq, Robinson and Dikembe Mutombo for most double doubles after 6 games in the past 3 decades.

Towns is also averaging 3 blocks per game despite going blockless in his NBA debut. 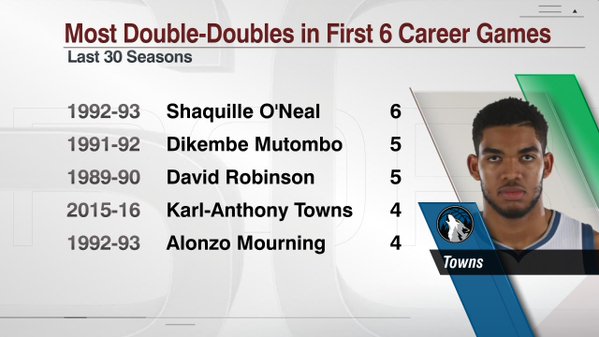 Just for kicks, here’s how crazy Shaq’s first 6 games were.

Shaq would go on to rack up 8 20/20 games including a 46 point/21 rebound game. He would also have 7 games with 7+ blocks including a 38 point/16 rebound/8 block night. Despite those numbers Alonzo Mourning did receive a vote for Rookie of the Year against Shaq.