After missing six games with a rib injury, Kevin Durant made his return on Thursday and played just 17 minutes before getting ejected for the fifth time this season. Steve Kerr said KD was ejected for saying “the magic word” to a ref. Crew chief Bill Kennedy confirmed to a reporter that KD’s techs were a result of “vulgarity.”

“I got fouled, I told (the ref) how I felt about it, he kicked me out. That simple,” Said Durant, who is now two techs away from an automatic suspension that comes with 16 techs. “I could definitely talk to them a little better, I guess.”

The five ejections ties Larry Sanders (2013) and Charles Barkley (1998) for the second most ejections in a season over the past 20. Tech king Rasheed Wallace was ejected seven times TWICE during that span.

Here’s a look back at all five of KD’s ejections from this season and the best quotes about them.

KD got to share his first ejection of the season with teammate Steph Curry, who may or may not have intentionally thrown his mouthpiece at the ref in the final minute of a game against the Grizzlies.

After the game, Steve Kerr had this amusing quote about Curry: “He might be suspended eight maybe 10 games for that. It was egregious. It was awful. It endangered thousands of people in the stands”

Yelling “Fuck you” to the ref will get you kicked out of the game 1o out of 10 times and that’s what KD had to say to a ref after scoring a bucket.

“I guess I tried to show (the ref) up, and he didn’t like it, so he threw me out,” Durant said. “The refs run the game, so if they’re not feeling good today, they can just make any decision they want. I have to know that they got all of the power, and I got to shut up and take it.”

After hearing that quote, many of us thought KD was really going to just shut up and not talk to the refs like he was using a burner account on Twitter. We were wrong.

KD and Boogie Cousins got the boot after some modern day NBA fighting.

“I don’t want to get suspended. I love to play, I love making money for my family. So I’m not trying to get suspended, I’m not trying to get in no fights with nobody. Nobody on the floor is going to fight. Nobody in the NBA is going to throw no punches. We’re just talking, we’re just getting into it. It’s a heated matchup, it’s a heated conversation, and we said what we had to say and moved on. If it escalates, we got so many people that can get in between us and prevent us from doing anything stupid because we’re grown men, we don’t want to get into nothing. It is what it is; we’re both going to stand up for ourselves, and that’s what happened.”

This was Durant’s third ejection in 18 games.

KD’s career night in the assists department (14) was ruined by a crossover?

“I was dribbling up on the right side,” Durant said. “I made a right-to-left cross. He said I carried. He kind of let that go. I asked him where did you get the carry from? He said I froze the defender. I said that’s what a crossover is for, and that’s why I do it, to freeze my defender. He tried to make a bunch of excuses and I told him he was wrong. He went to halftime probably with an attitude.”

“So second half, his whole thing was like he’s trying to get me,” Durant said. “Look at my first tech. I got the rebound and I dribbled the ball hard and he teched me up. He was searching for me. He was looking to try to tech me up to get me back because he was still in his feelings from the first half. That’s what’s been going on around the league the whole year is a bunch of that. You know what I’m saying? I’ve got to keep my head a little bit. But I was upset. I’m a human being too. I get upset.”

KD would later say he was an “asshole” and “a jerk” with the refs and deserved the ejection.

KD VS THE BLOG BOYS

And if you haven’t heard his latest appearance on The Bill Simmons podcast, I highly suggest it. It will make you either love or hate KD more depending on if you love or hate him now. 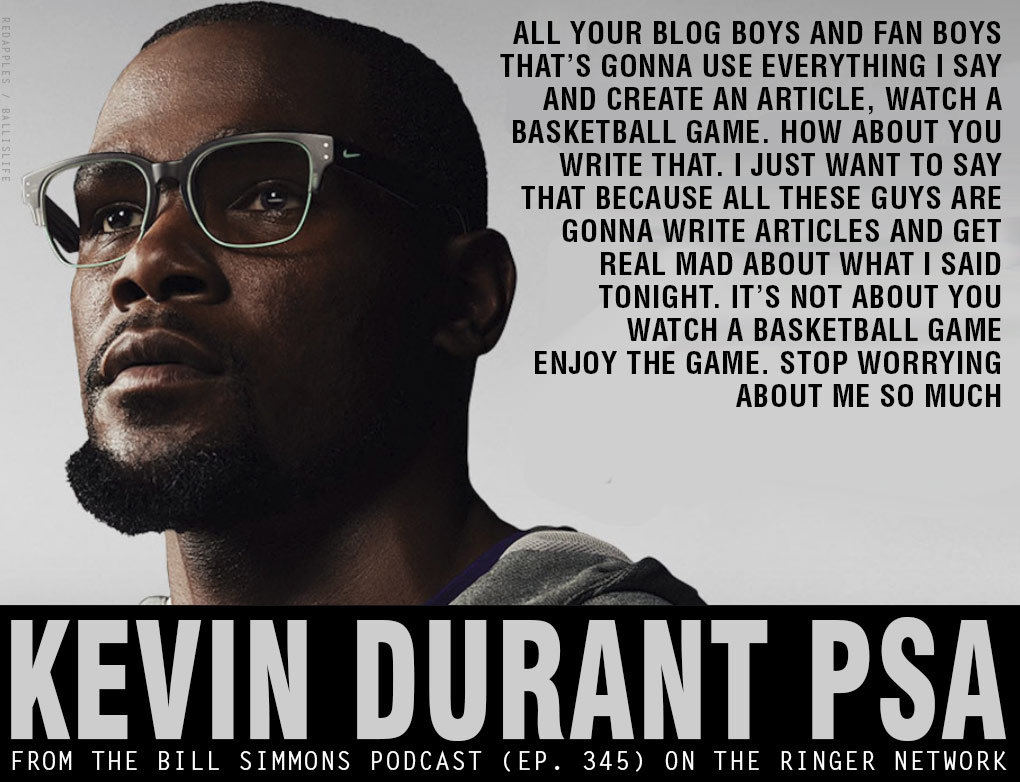