You might have heard the name Lil Dicky recently. His latest epic rap video – which features cameos by Kevin Durant & Mark Cuban – is trending on social media networks today. Last month, he had the #1 rap and comedy album in the US with his Kickstarter funded debut ‘Professional Rapper.’ Some Ballislife fans might even remember us raving about Lil Dicky last year when he released the amazing ‘Russell Westbrook on a Farm‘ which was a nice break from his comedic classic videos like ‘Ex-Boyfriend.’

I’ve been such a huge fan – not huge enough to call myself a ‘dickhead’ – since ‘Ex’ came out, that I wanted him to perform at our Ballislife All-American Game (Kendrick Lamar & Casey Veggies were past performers) for the past 2 years but he had shows already booked on those dates. Then on June 16th, I had plans on attending his show in Houston and doing a long overdue interview with him….but a freaking flood hit Houston. The show was cancelled and I was stuck without electricity for about 10 hours. Pissed because I can’t see and pissed because I didn’t get to see Lil Dicky again before “he blew up.”

Then the album dropped and instantly started rising to the top of my favorite albums of the year.  I mean, how could you not love an album where the artist said he made it with pink eye because he thought to himself “what would Michael Jordan do? He would play with pink eye.”

How could you not love an album by a guy who said his influences were Larry David, Kobe Bryant, Will Smith and Allen Iverson?

How could you not love an album that has a song with Snoop Dogg and in the video for that song it shows Derrick Rose on the ground holding his knee….. 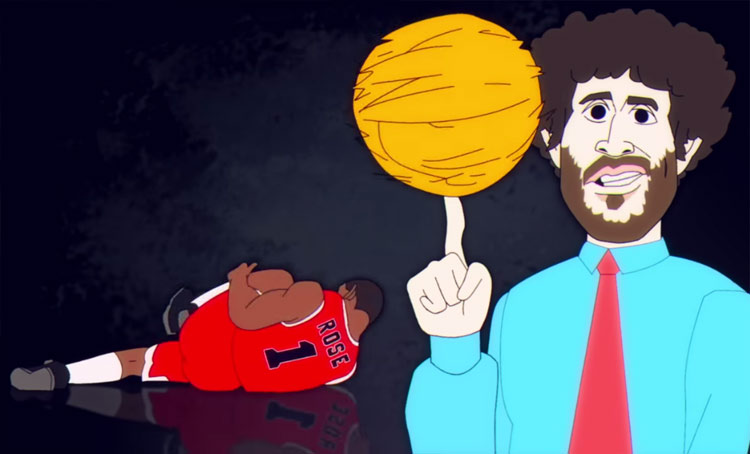