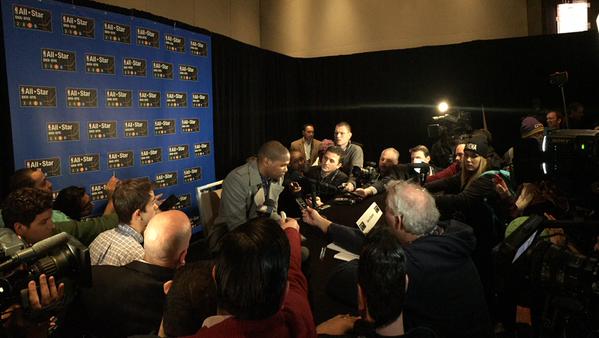 “You guys really don’t know shit,” said Durant to the media on Saturday. “To be honest, man, I’m only here talking to y’all because I have to. So I really don’t care. Y’all not my friends. You’re going to write what you want to write. You’re going to love us one day and hate us the next. That’s a part of it. So I just learn how to deal with y’all.”

Now this is the part where some people say he’s getting paid millions, he has an obligation to do this and that, he should appreciate this and blah, blah, blah.

To be honest, why should he give a shit during All-Star weekend? As I awkwardly stood around and recorded large groups of people who waited an hour just so they could record Durant and ask him a question he’s already heard 10 times today and 20 times last year and just as many times the year before that and will probably hear twice as many times next year, I thought what’s the purpose of most of this and his time could be much better spent making kids and fans happy instead of sitting in a room with 20 mics in his face and being asked about the job security of his coach on a weekend which is supposed to be a “break.”

So give the guy a break…until at least next week.