On February 27th of 1996, 19-year-old Kevin Garnett put up 20 points and 8 rebounds against Michael Jordan and the 72-10 Bulls in the Windy City. “Da Kid” connected on 10-of-16 shots and also had three steals and a couple of highlight dunks in his breakout performance. Unfortunately, the breakout performance wasn’t enough to prevent the Wolves from taking a 21-point L from Michael Jordan (35 points).

Considering KG played his high school ball in Chicago, it wasn’t that big of a surprise to see him play so well on this night. If you lived in Chicago in the 80s or 90s, there’s a good chance you liked the Bulls and worshiped Michael Jordan. I don’t mean worshiped as in you were a big fan, I mean worshiped as in Jordan had more pictures in your house than most family members. You probably even gave his Airness thanks during your nightly prayers.

KG was such a big fan of MJ, he not only was willing to wear a pair of Jordans (XI) in an NBA game, he was willing to write Jordan’ name with a smiley face on the tape above his socks! And he did this — in a 1996 game against the Utah Jazz — while Jordan was still playing in the NBA. 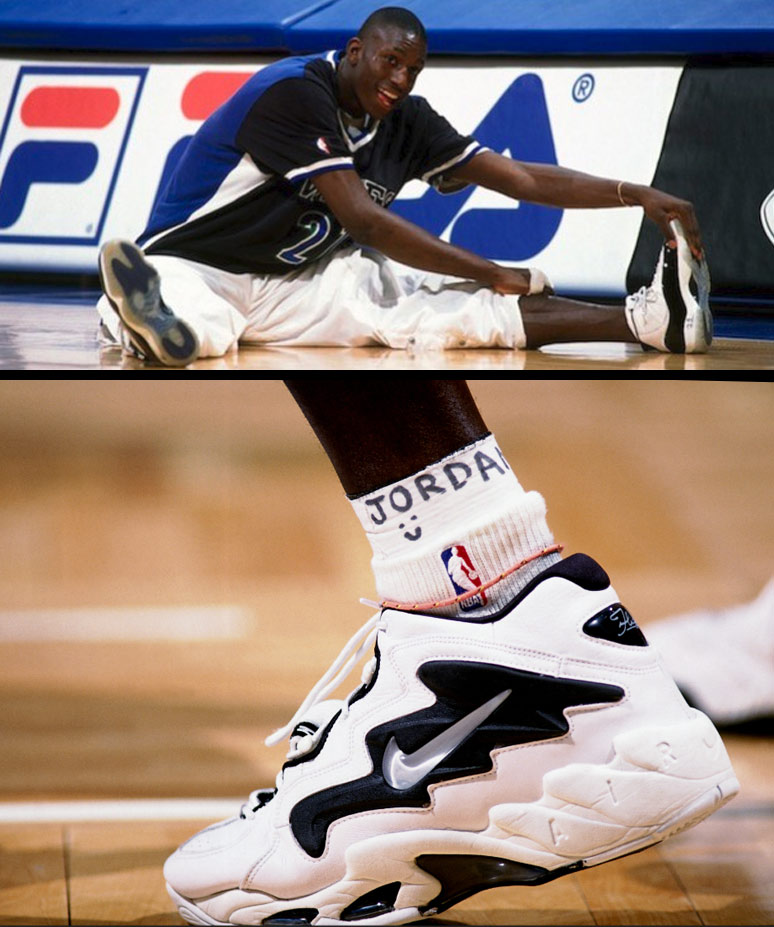 I don’t want to get into another (boring and often pointless) Jordan vs LeBron debate but I have and always will say one of the main reasons why Jordan is the GOAT, and will always be the GOAT, is because he actually struck fear in many NBA players (I have countless stories from former players to back this up). He also made other players feel like a fainting fan at a Michael Jackson concert (I have some of those stories too). I’ve seen quite a few rookies look just like international teams did when they faced Jordan and the Dream Team in 1992. KG wasn’t one of those rookies. He wasn’t afraid of Jordan and he wasn’t asking for autographs during the game either, but the act of playing ball with another man’s name on your legs is an act I can’t imagine any current player doing with LeBron.

“Believe it or not, you find yourself watching him doing something versus doing what you’re supposed to be doing.” Said KG when talking about his first game against Jordan. “That was his influence on his game.”

“His influence was so big and so bold on the game that everybody that was part of that era . . . at some point was so into what Jordan was, trying to copy, trying to duplicate. That was probably similar to when Dr. J played or Larry Bird came out. When you look up to somebody like that, you’re a fan, and you catch yourself kind of forgetting, ‘Yo, we’ve got him in a game.’ It’s part of it. It happens.”

During a 2017 interview with Complex, KG shared a pretty great story when he was asked about his favorite trash-talking story.

We were on the right side of the court and Steph [Marbury] told me to switch and guard Jordan. This was before he left the game, he’s in Chicago. He’s still super Mike. So Flip [Saunders] tells me to switch so I switch on him. So I’m standing in front of him and, no bullshit, I count his dribble pattern. He goes, one, one, crosses over, boom. Crosses back over, one, one, crosses back over. He’s trying to call a play. So when I get the rhythm pattern, I’m like, oh shit, I’m about to rip this mother fucker. I ripped him, “Give me this shit. Man, I don’t want to hear that shit.” He’s trying to say something to me. Man, I don’t want to hear that shit. I ripped it. Crowd’s going crazy. I’m super gassed. Listen, we go down and score the ball, I’m so freaking hyped, Flip tells me “You take Jordan. You take Jordan.” “I got him.” This is no bullshit, I’m so gassed. And he kind of looked at me and I blinked—this is no bullshit—I blinked, in the same stance and everything, he came down and ran the same paly, did the same dribble, I counted it. But I blinked and when I opened my eyes from the blink he was at the rim laying it up like, “Ok, yeah, yeah, ok.” I didn’t even move. I didn’t even react, you know what I’m saying, it was that fast. That’s the one I always remember.

I also have a great KG story told to me by Isaiah Rider but I’m not allowed to share it (like most of Rider’s stories). What I can share is this amusing story from KG’s former teammate during a 2017 radio interview.

“We were in Chicago. I had played against Mike three times head up,” said Rider. “KG had never seen me play against Mike.

Apparently, KG was saying all of that while Jordan was “standing right here,” Rider continued.

Jordan responded by scoring 17 points in the final quarter.

Out of all of the exceptional performances KG and MJ had against each other’s teams, my favorite might be a little known one in 2002 when KG was now known as one of the best players in the league and MJ was a Washington Wizard pushing 40 (not points but in age).

And my all-time favorite video of KG talking about MJ came just a few months ago during an episode of KG’s Area 21. During a discussion about Jordan and (I’m not going to say his name), KG got out of his seat and almost lost it while praising the GOAT.

“Man, come on, man. Nah, man. That man saved basketball when basketball was on the verge of losing it. When we had addicts when guys came in camp overweight. Who do you think started coming in camp in shape, ready to go day one? Who started that?”

I don’t agree with everything he just said but it’s hard to argue with passionate people about loved ones and KG has made it very clear since he arrived in the league that he has a lot of love for MJ. 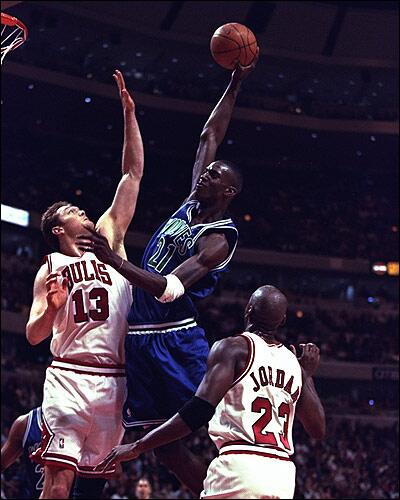 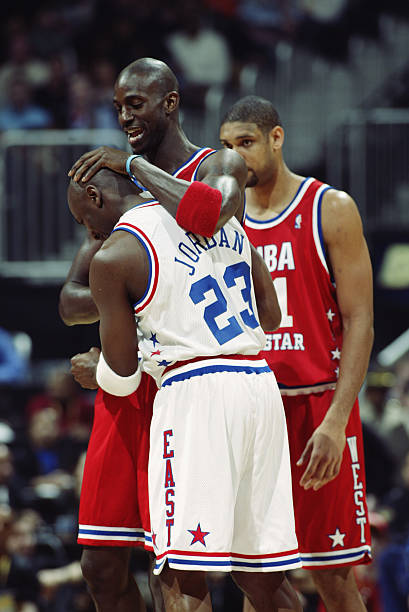 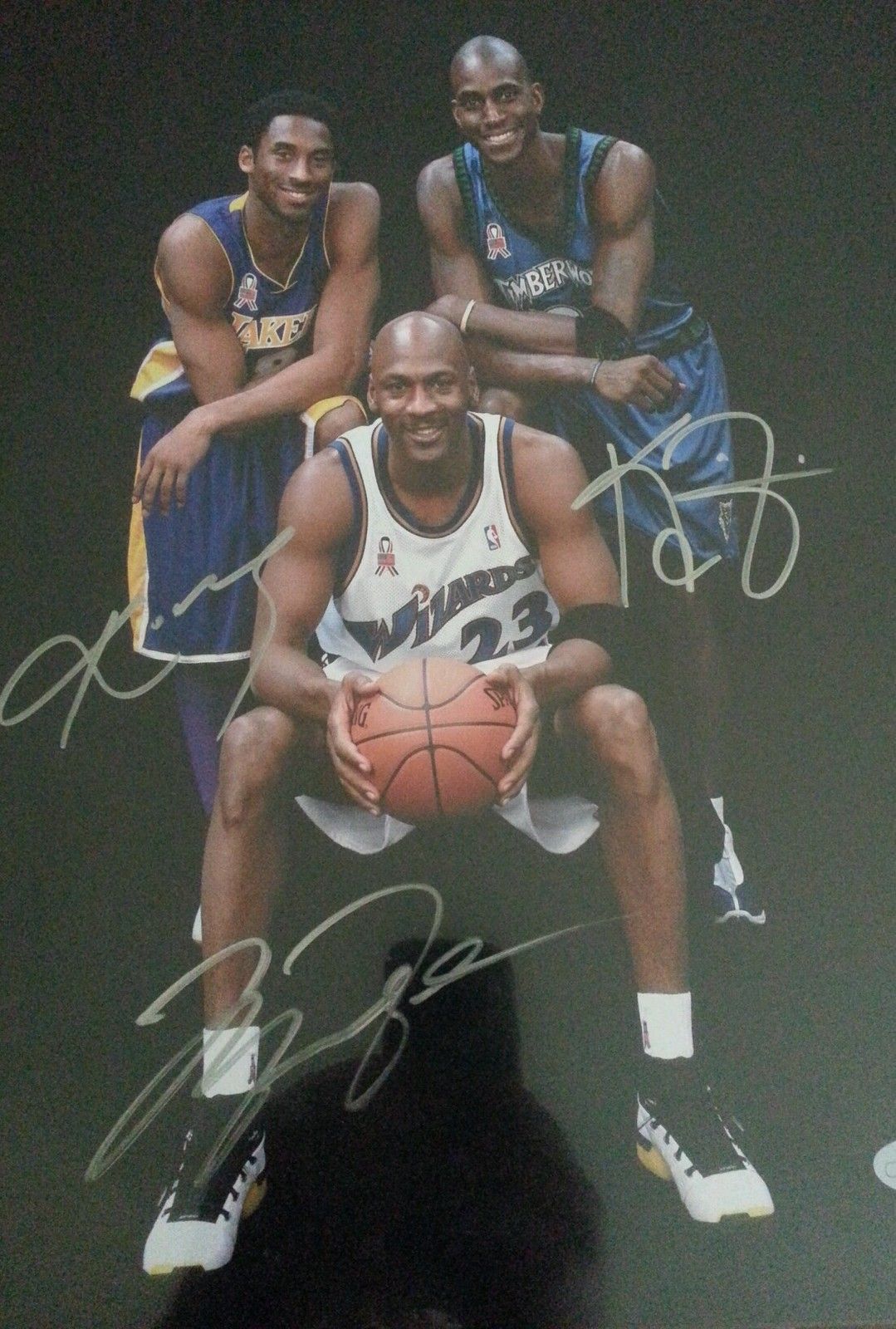