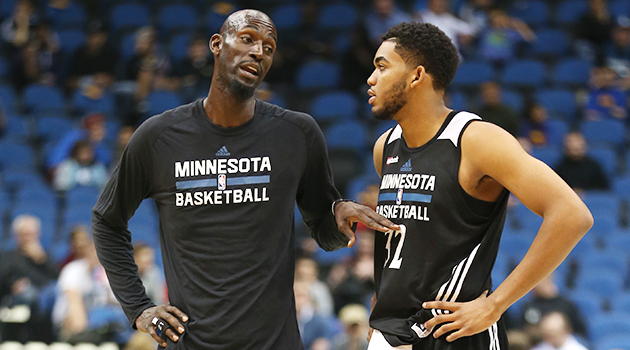 At the not-so-young age of 39, with more minutes logged than any player in NBA history other than Kareem and Karl Malone, Kevin Garnett and his hurting right knee might be done for the season and possibly with his NBA playing career. He was averaging career-lows of 14 minutes, 3.2 points and 3.6 rebounds this season and has missed his last 16 for the non-playoff contending Wolves.

The good news is, he doesn’t need a healthy knee to be able to mentor future rookie of the year Karl-Anthony Towns or to look good in a suit while yelling and cursing at opponents from the bench. Here’s KG at a recent game  letting Eric Gordon know what he thinks about his game.

Yes, that was a real video and not a ItsReal85 lip-synch classic. If you want to see KG in one of those, then go to the 43 second mark of this video.

Obviously if KG does retire and becomes a minority owner, the NBA and Wolves PR department aren’t going to want him acting like he’s about to get into a “bar fight,” but from a fan perspective, it’s pretty damn awesome.