Back in 2006/2007, Michael “Be Easy” Beasley was considered by most scouts the best high school player in the nation, a future lottery pick and star in the NBA. He was a scoring and human highlight machine like Dominique Wilkins with the trash-talking skills of Larry Bird and a pretty impressive basketball resume, which included multiple national championships on an AAU team with Kevin Durant and MVP awards at the McDonalds All-American game and the inaugural Elite 24 game at Rucker Park.

He was also one of the main subjects on the hoop documentary “Gunnin’ For That #1 Spot,” which was directed by the late Adam Yauch of the Beastie Boys and centered around eight of the nation’s best high school kids participating in the Elite 24 game. One of those other eight players was a clean-shaven-slightly-heavy-looking Kevin Love aka Kevlar aka Bulletproof.

Love, ranked #6 (two above DeAndre Jordan and 17 above future #1 pick Blake Griffin) in the nation, was a beast since his first game as a 6’8″ HS freshman at Lake Oswego; He had 50 points and 20 boards in a single game as a sophomore; He won 3 straight Class 4A Player of the Year awards and took his team to 3 straight championship games — losing the final one despite a 37 point, 15 rebound effort.

He finished his high school career as the all-time leading scorer in Oregon boy’s basketball history and looked like another can’t-miss future star in the NBA by the time he arrived at Rucker Park and showed off his quarterback arm to his future Timberwolves’ teammate Michael Beasley.

Besides sharing highlights at the Elite 24 game, becoming lottery picks (Beasley #2 & Love #5) in 2008 and later teammates in Minnesota, Love and Beasley’s basketball journeys over the past decade couldn’t be any more different: Love has racked up awards (NBA Most Improved, 3-Point Champ), three All-Star appearances, two All-NBA 2nd Team honors and an NBA championship; Beasley has had a hard time finding a home in the NBA and picked up his only pro honors (MVP, two All-Star games) while playing in China. In 2016, Beasley returned to the NBA and signed with the Houston Rockets for $1.4 million — that’s about $18 million less than what the Cavs paid Love last year and $24 million less than what Love will be paid during the 2019/20 season.

Regardless of what he’s getting paid, Beasley can say he’s still in the league, he’s still putting up numbers in the league and can tell teammate James Harden, “Remember when I was ranked 10 spots above you in high school?” 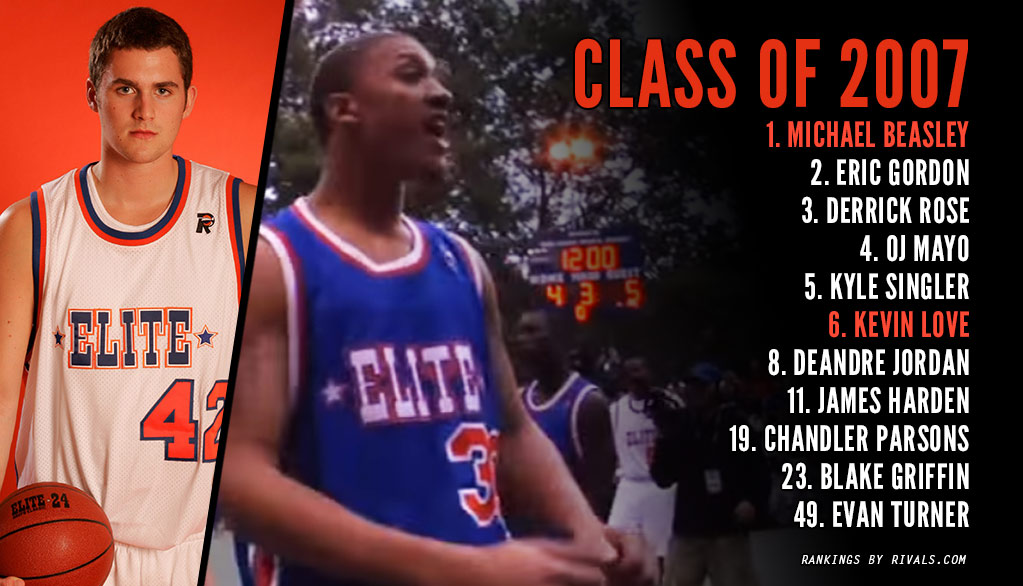