Once upon a time, one of the greatest clutch players of all-time had one of the least clutch NBA playoff performances of all-time: The day was May 12th of 1997, the event was Game 5 of the Western Conference Semi-finals between the Utah Jazz and the LA Lakers, the player was an 18-year-old rookie named Kobe Bryant and the FAIL was (not one, not two, but) THREE airballs in the final minute of overtime and FOUR total, including the final seconds of the 4th quarter.

“I had some good looks,” Bryant said after the game, which became his defining moment. “I just didn’t hit the shots.”

For many, the most memorable shot from this game wasn’t one of those airballs but the photo of “big brother” Shaq with his arms around his “little brother” after the final airball. 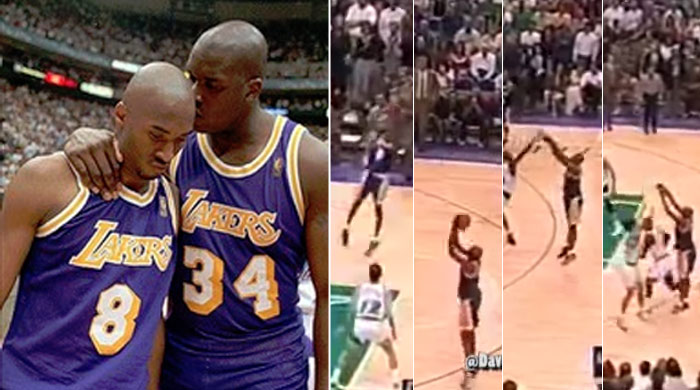 “I said,`You know what, you might have shot four airballs… see all these people in here laughing at you… just remember that when we meet these guys next year — then just hit it.’ You’ve got to remember stuff like that.” Said Shaq about his pep talk with Kobe. “I wasn’t upset that he shot those airballs. He was the only one with enough guts to shoot the ball.”

Kobe finished the game with 11 points on 4-of-14 shooting in 29 minutes. But he wasn’t done shooting. After the game, the Lakers flew back to LA and while most of the players went back to their homes, Kobe Bryant went to a local high school (Palisades), found someone to open the doors for him and shot jump-shots all night and into the morning.

Six months later, the Lakers season tipped off with a game against the Utah Jazz and Kobe Bryant scored a game-high and highlight-filled 23 points off the bench in a 104-87 win.

17 years later, it was only fitting that Kobe would also end his NBA career in a game against the Utah Jazz. And like his airball game in 1997, this game also ended with Shaq putting his arm around Kobe. But this time, it was to congratulate him on scoring 60 in his final clutch performance.

ALL OF KOBE’S GAME WINNERS

18 years after that 18-year old had one of the least clutch performances of all-time, a video showcasing 34 of his 36 career-game winners were released.