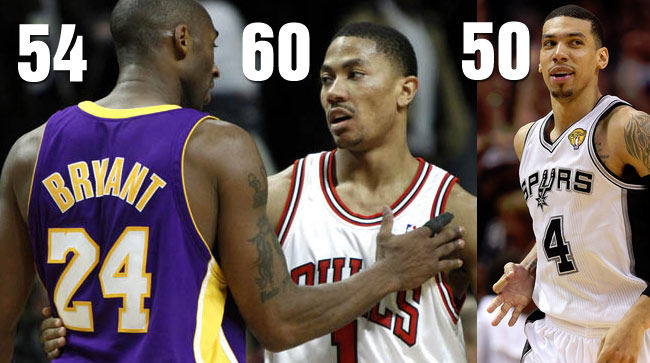 Real quick, name 10 players better than Kobe Bryant right now.  Not a prime Kobe but a 37 year old Kobe coming off of 3 consecutive season-ending injuries. Some of you probably did it fairly quickly while others probably struggled because you still feel Bryant belongs in the top 10. For those who did name 10, now try to name 53 players better than Kobe.  You probably aren’t even going to try to name 30 but Sports Illustrated not only tried but they dropped Kobe 30 spots from last year and named 53 players they feel are better than Kobe Bryant going into next season.

To those who didn’t have an issue with Kobe getting his lowest 2K rating ever in 2k16, being in the bottom 50 of SI’s Top 100 sounds fair. To those who balked at Kobe’s 2k rating of 85, they will probably be even more offended to hear Sports Illustrated say, “Indeed, there is a pretty good case to be made that Bryant shouldn’t be on this list at all.”

But he did make the list and for these reasons.

Bryant lands on this list because his lingering skills—his legendary competitiveness and fearlessness, his decades of experience in high-pressure environments, his volume scoring, his ability to command a defense’s attention, his skilled footwork in the post, his shot-creation ability—could theoretically provide real value in a less compromised environment. Or do you think Kobe will just ignore the chatter and critics before taking the court next season to silence them?

My reaction to critics is the same as my reaction in the vid #excuseme https://t.co/Y7w4TnAow0