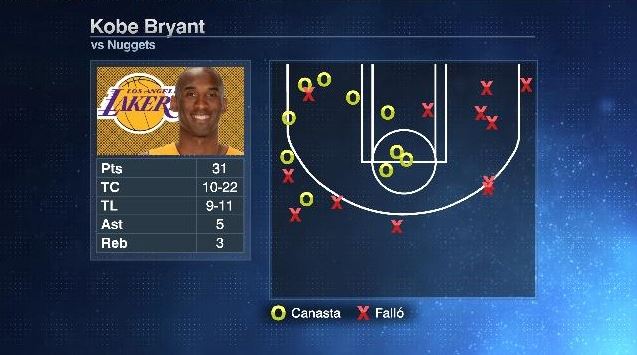 “I can still play a little bit,” said Bryant after tying his season-high of 31 points on Tuesday in a win against the Nuggets. “It was a great test for me tonight to see if I could still play both ends of the floor.”

On the offensive end, the 37 year old Bryant looked great – at least from the left side and within the 3-point line – hitting his turn-around jumper with ease, including a spinning jumper with 30 seconds left in the game. The final shot had the Denver crowd chanting his name even though it meant the Nuggets were about to lose.

On the defensive end, Bryant was even more impressive by shutting down the red-hot Will Barton (18 points in the first quarter) in the 2nd half.

“Barton was tearing us up in the first half,” Coach Scott said. “I asked Kobe if he wanted to guard him. He’s like, `Yeah, I got him.’ Two points after that. He just did a fabulous job.”

Not everybody was so full of compliments. To teammate Julius Randle, Bryant was just doing what he’s been doing his entire career.

“I’ve been watching him since I was a little kid. Nothing new.”