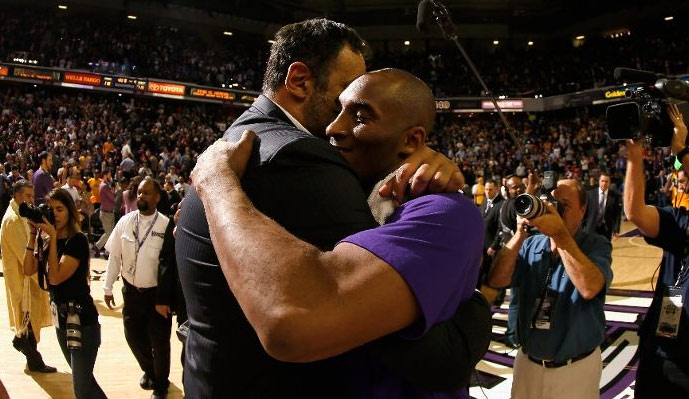 “He gave me a Charlotte Hornets jersey. No. 8. It’s awesome,” said Bryant who shared a long hug with Divac after the Lakers & Kings game. “He has a great sense of humor and is a real practical joker. It goes well with my sarcasm.”

Now flashback to Jully 11th of 1996, when Lakers GM Jerry West packaged Divac like a gift and traded him to Charlotte for the rights to a 17 year old Kobe Bryant.  It would turn out to be a great day for Lakers fan – especially since moving Vlade allowed them to sign free agent Shaq – but it was a devastating one for Divac.

“It felt like someone from behind hit me with a hammer,” Divac told Yahoo Sports. “It was the first time in my career that something happened in a way I didn’t plan. I was devastated. I was thinking, ‘I play basketball for fun.’ My father said when I brought my first [basketball paycheck] back home, ‘Who gave this to you? Are they crazy? Do they know you would play basketball even if they don’t pay you?’

Vlade did eventually go and after a couple of seasons with the Hornets, he would end up Sacramento.  It was in the land of Cowbells where Divac became really familiar with Kobe as their teams became rivals (although some would argue they weren’t rivals because the Kings never beat the Lakers) and gave the basketball world some of the most exciting playoff series ever.

Then in 2004, Vlade returned to the Lakers and finished off his impressive career as a teammate of the man he was traded for back in 96.

12 years later, we are back to the first sentence and Kobe is the one who is about to end his NBA career with the Lakers and Vlade is just fine with how history played out.

“I didn’t like it in the beginning, but later on, if I was in Jerry West’s shoes, I would do the same thing,” Divac said with a laugh. “I would trade myself for Kobe, no-brainer.”