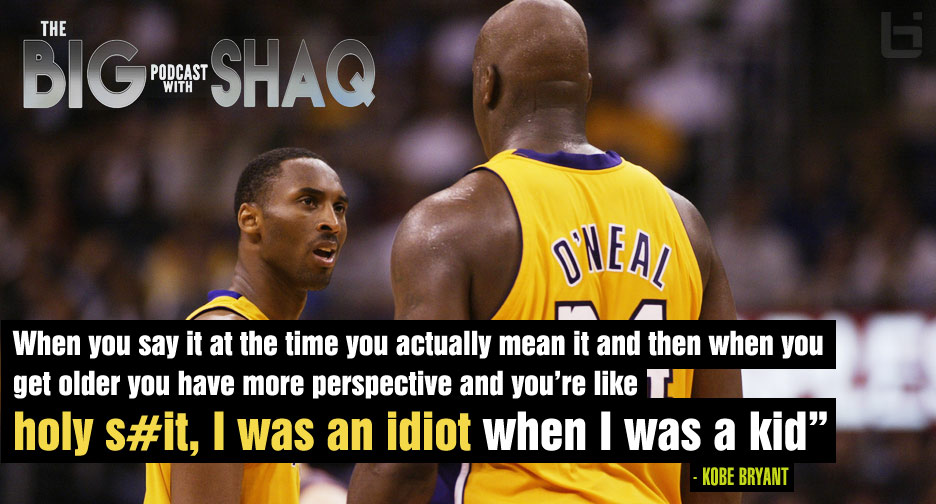 Although Shaq and Kobe kissed and made up a long time ago and have each talked about the mistakes they made when it came to their relationship, the two stars of the Lakers dynasty from 2000-2003 have never done an interview together discussing those mistakes until now.

Kobe Bryant was a guest on Shaq’s podcast, The Big Podcast with Shaq, and talked about how immature they were back then and how it caused the breakup of the best little man/big man combo in NBA history.

“When you say it at the time you actually mean it and then when you get older you have more perspective and you’re like holy shit, I was an idiot when I was a kid.” Kobe said. “To me, the most important thing was really just keep your mouth shut. You don’t need to go to the press with stuff. You keep it internal and we have our arguments and our disagreements, but I think having our debates within the press was something I wish would’ve been avoided, but it did kind of create this whirlwind around us as a team with myself and Shaq and the press and the media that just put so much pressure on us as an organization.”

The two also joked about the time Shaq reportedly said he was going to kill Kobe.

Kobe also compared their situation to a hypothetical situation of Michael Jordan playing with a prime Wilt and how many years they would be able to last with MJ wanting to “come up.”

Speaking of maturity, all you have to do is watch the following two videos to see and hear how much Kobe has matured since the breakup.