Maybe I missed it but I can’t recall Kris Humphries getting dunked on as a Wizards. AS  A CELTIC? Where do I start? There’s Mason Plumlee’s dunk, Taj Gibson’s dunk, Noah’s dunk, Richard Jefferson’s dunk and of course Blake Griffin’s dunk of the  year nominee on Kim K’s ex.  But nothing on him since he joined the Wizards.

Enter Thomas Robinson who who came off the bench during the Blazers win over the Wizards last night and scored his only 2 points in Humphries face….and then told Gortat to get out of his. 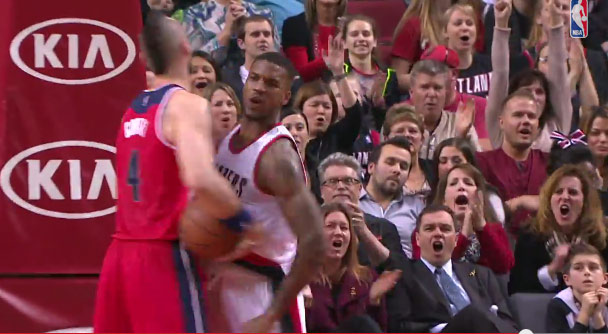 But seriously….when Humphries gets minutes he produces.  He’s been under the 20 minute mark of late but when 2015 started he was getting up to 30 minutes a game and was either dropping 20 points or 20 rebounds.  So props to Kris but sorry Kris, I have to post this.