Here’s my advice to all future NBA players and their agents: Make sure every negative tweet about a future pro teammate and/or opponent has been deleted from your Twitter/Facebook/Instagram/Vine timeline and hope that a snapshot was not taken (which is unlikely).  Just in the last few weeks we have seen a few examples of long but not forgotten tweets resurfacing.

When the Warriors and Cavs faced off in the finals, tweets made by Draymond Green in college about LeBron James caused  some buzz.

When James Harden was asked about the ridiculous Lil B curse and he said he never heard of Lil B, a tweet made by Harden in 2011 resurfaced. 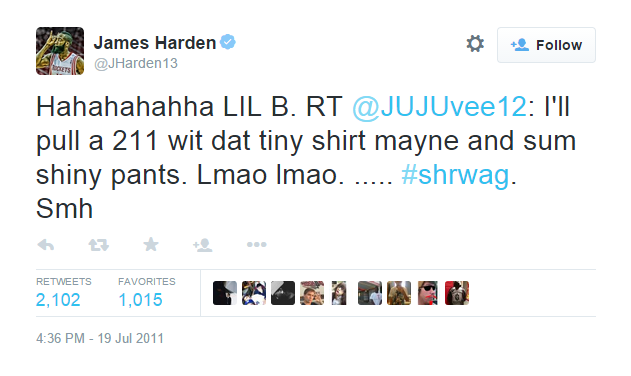 And now the latest example is Lakers’ draft pick Larry Nance Jr who posted this on Twitter 3 years ago. 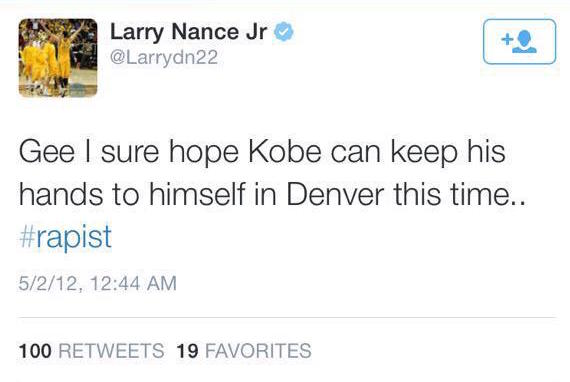 ESPN’s Baxter Holmes said Nance deleted the tweet minutes after his selection and that the Lakers GM and PR boss have addressed the tweet but “Kobe & Nance will have to work it out themselves.”

“I’ve spoken to Larry Nance Jr. with John Black, our public relations director,” GM Mitch Kupchak said Thursday night. “Really, I’m not in a position to really share information. But it is something that they will have to discuss amongst the two of them.

“My understanding is that it’s something that happened years ago, and in today’s world, things don’t go away, which really doesn’t make it any less offensive because it was said three, four years ago.”

Knowing Kobe’s sense of humor, I doubt he’s going to hold it against Nance but I’m sure he will bring it up while trash talking to the rookie in practice.

Speaking of Kobe, humor and the Denver incident, this gives me a good excuse to post this clip from my friend and huge hoop fan Daniel Tosh.