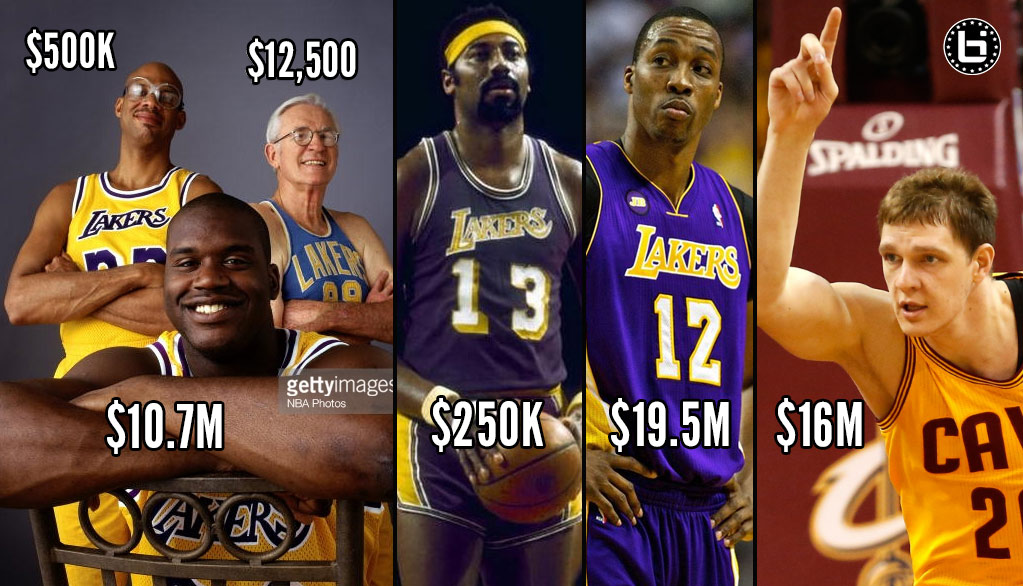 In a 1997 book titled Who’s Running the Asylum? Inside the Insane World of Sports Today, released less than a year after the Lakers signed Shaquille O’Neal to a 7-year $122 million contract, the original MDE and former Laker Wilt Chamberlain criticized the contracts of current NBA players and explained why he was underpaid throughout his career. If he had complaints about the salary of Shaq and other hall of fame centers during the 90s, you can bet he’s turning in his grave today after hearing about the contracts of Hassan Whiteside, Andre Drummond and the Lakers signing Timofey Mozgov to a four-year deal worth $64 million.

In 1946, the Chicago American Gears made George Mikan the highest paid basketball player by giving him a 5-year deal worth $60,000. With rookie Mikan in the middle, the Gears won the National basketball league championship and then went bankrupt. In 1947, the Minneapolis Lakers signed Mikan to a 1-year deal worth $12,500 and went on to win a championship with the league MVP. The Lakers would also win 4 more championships with Mikan before his retirement in 1956.

In 1959, Wilt Chamberlain shocked the world when he signed the biggest rookie contract in NBA history: $30,000, which was $5,000 more than the league’s highest paid player (Bob Cousy) and what the owner, Eddie Gottlieb, paid for the 76ers franchise 7 years earlier. After dominating the league statistically, the original MDE became the first $100k man and in 1968 the Lakers gave him one of the most lucrative deals in the history of sports: 5 years at $250,000 per year.

Wilt rewarded them by going to the finals in 4 of those 5 years and a championship in 1972.

3 years later, the Lakers replaced Wilt with the best center in the league and arguably of all-time: Kareem Abdul-Jabbar. The sky hooking big man from the Bucks, who once said, “A bidding war (for a player) degrades the people involved. It would make me feel like a flesh peddler, and I don’t want to think like that,” was an absolute steal for LA; They only sent Brian Winters, David Meyers, Junior Bridgeman and center Elmore Smith to Milwaukee for the only player in NBA history good enough to win a MVP award on a non-playoff team. His deal with LA was 5 years at $500,000+ a season.

In 1983, Kareem did get into a contract squabble with management and was looking to get paid $2 million a season like Moses “Mo Money” Malone, which was $600,000 more than what the Lakers wanted to pay him. Kareem would get a little more than $1.5 million that season and in 1987 signed the richest salary ever in team sports: $5 million for 2 years with $3 million coming in the 2nd year. Many thought it was way too much for the 40 year old center even though he helped the franchise win 5 titles between 1980-1988.

On July 16th of 1996, the Orlando Sentinel posted a survey on the front page of their newspapers asking “Is Shaq worth $115 million over 7 seasons?” The local community, still upset after the Magic got swept by Michael Jordan and the Bulls in the playoffs and falling deeper in love with Penny Hardaway, called in and said No; 91.3% of 4,668 callers said no.

The poll results were understandable at the time but what was offensive was the Orlando Magic’s original low ball offer of $56 million over 4 years to Shaq. Equally crazy were the contracts being handed out that summer by other teams, especially the Miami Heat: 7 years/ $105 million for Alonzo Mourning and 7 years/ $98 million for Juwan Howard. A week later, the Hawks gave Dikembe Mutombo $10 million a year. The sweating Magic knew they had to up their offer, especially when Jerry West traded Vlade Divac to free up money and for some high school kid name Kobe and offered Shaq a 7 year deal worth $95 million. The Magic matched the offer. Then West dumped Anthony Peeler and George Lynch and came back with a Godfather offer of $120 million. Shaq signed the deal and became a “big fish with other big fish” instead of a “big fish in a small pond.” He would also become a 3x NBA champion after helping the franchise win 3 straight NBA titles between 2000-2003.

In 2012, the Lakers thought they finally had a replacement for Shaq when they traded headcase Andrew Bynum in a blockbuster deal that landed disgruntled All-Star Dwight Howard aka Superman 2.0 in LA. Lakers GM Mitch Kupchak celebrated the trade, looked at the 8 retired Lakers jerseys and said “we’re hopeful that 10 years from now, we can add a jersey to that wall over there that says Dwight Howard.”

Kobe Bryant was equally excited at the arrival of Howard.

“Well, it looks like Superman has found a home,” Bryant said. “…The Lakers have landed a piece that will hopefully carry the franchise long after I’m gone. I have spoken to Dwight Howard, and we are locked and loaded to hopefully bring back the title.”

I don’t have to go into details about Howard’s short time in LA, but it was a nightmare and nobody seemed more annoyed with the $19.5 million “Dwightmare” than Kobe Bryant.

Less than 1 year later, the Houston Rockets brought together 4 great Houston big men – Yao Ming, Ralph Sampson, Elvin Hayes and Hakeem the Dream – to welcome Dwight Howard to Houston and as of 6AM on July 1st, 2016, hours after the Lakers gave Mozgov $16 million (a little more than what the Lakers paid Roy Hibbert last season), Dwight Howard is looking for a new home and a $24 million starting salary.