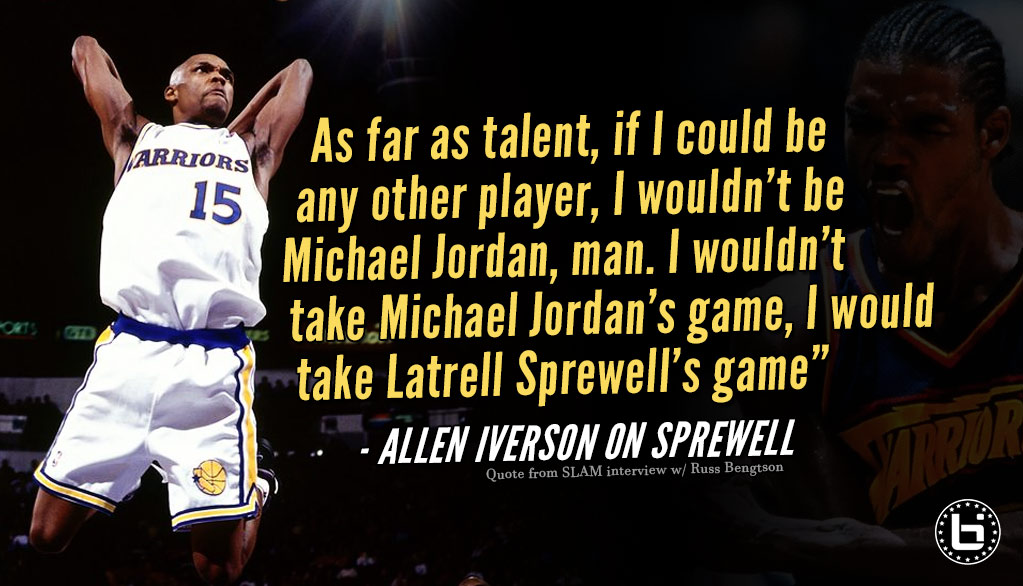 Before Latrell Sprewell was known as the $100 million man just trying to feed his kids, the Knick who almost delivered a championship to New York in 1999, and the Warrior who choked his coach in 1997, the All-NBA first-teamer was arguably a top three shooting guard in the league. He could shut down the league’s best scorers or blow past any defender (even though he could only go right) and finish with an angry two-hand dunk that rivaled Charles Barkley’s gorilla slams from his Philly days. He was that good and as unique as the spinning rims he made popular in 2001.

It’s been 15 years since Spree unleashed the spinners on us and 11 years since the 5 x All-Star played an NBA game. For five years after that game, the only stories that appeared in the news about Spree were legal issues and then the next five were pretty much silence.

So where the hell has he been?

Back in July, my favorite angry comedian/actor/podcaster/director/celebrity hooper/guest on NBA shows, Michael Rapaport, visited Milwaukee and conducted a live interview with my favorite angry dunker and asked that question, along with every question I’ve wanted to ask him over the past 20 years.

I don’t want to ruin any of the great and sometimes shocking moments in the must-listen interview, so I’m just going to list a few bullets.

It’s a must-listen for all fans of Sprewell, 90s basketball and/or Michael Rapaport.

Before we get into a bunch of throwback videos, here’s an interesting bonus story from a friend of mine, who was Sprewell’s college roommate and practice partner. He told me Spree was such a horrible shooter when he first came to Alabama that he would literally spend hours on just his jump shot, outside of practice, every morning. I would say the hard work paid off because the once-unstoppable player on NBA Live 95 once hit 9-9 from the 3 point line.

Also worth bringing up is Allen Iverson praising Spree during a 1999 interview with Russ Bengtson of Slam Magazine.

Really the only guy that flipped me out when I was on the same court with him was Sprewell. ’Cause if I could be any other basketball player, I would be Sprewell. What he did was foul, everybody know that, and I would never do no shit like that. I mean, I guess he just flipped out and snapped and he’s going to learn a lot from it and he’s a good dude, ’cause I know him as a person. But as far as talent, if I could be any other player, I wouldn’t be Michael Jordan, man. I wouldn’t take Michael Jordan’s game, I would take Latrell Sprewell’s game. I love the way he play. I love the way he play and he hard, hard on the court. You know, he might talk shit to you, he might not. He might give you 30 or 40 with a regular look on his face, like, “Whatever. This is what I do. That’s the way I play. I don’t gotta talk shit, ’cause I do this. I do this nightly. I don’t have to talk no shit to you to prove nothin’ to you.” But Spree, man. Spree’s something else.

AI: Energy. He can play the whole damn game. He got pride with his game, you know, And he just hard. When I look at him I see myself, ’cause he don’t care who you are, he just go at you. He go right at your chest, crazy, hard. He can shoot, he can run, he can dribble, he can jump. He’s smart, he know the game.

If not Sprewell, if I had a choice, it would be Shaq. I don’t think nobody could beat my team 10 to 15 times if Shaq was on my team. Never. I mean, that guy has talent that’s just unbelievable. He’s unbelievable. If I played with him, I don’t think nobody could beat me. I don’t know if you beat me in a series, but you won’t sweep me. That’s why I look at [the Lakers] and I’m like—Utah was a great team, Karl Malone, John Stockton did great, but you got Shaq on your team. How can you live with yourself knowing you got swept and you got Shaq on your team? Shhhh…