On Friday night, he generated a few great highlights to argue about on his way to an easy 27 points, 9 assists and 6 boards in 29 minutes vs the Suns. The best of those highlights (IMO) from the 25-point victory was this rebound and full-court touchdown pass to Jose Calderon that had the Cavs announcer yelling, “Spanish style!”

Later in the game, LeBron showed off his potential to be a 6’8″ Barry Sanders by spinning, knocking down a defender and scoring on a 1-on-3 break.

If you didn’t know, LeBron did play quarterback for one season in high school. He played two other seasons at wide receiver and was named All-Ohio both years.

You can learn a lot more about LeBron’s football career in the following video by JXMYHighRoller. Not mentioned in the video is LeBron wore #9 because of former FSU star Peter Warrick (FYI: the first sports website I created was a Peter Warrick fansite in 1998). 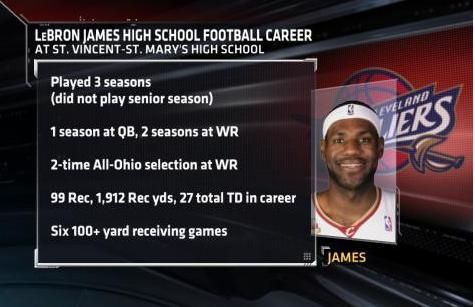 If you aren’t tired of the “15th season” talk, then you might enjoy this ESPN feature on how LeBron is “redefining greatness in his 15th NBA season.”