Clippers coach Doc Rivers thanked Cavs coach Ty Lue and called him his “favorite coach” after the Clippers gave the Cavs a 30-point beatdown on Saturday. The reason why is because the Cavs rested LeBron, Kevin Love and Kyrie Irving during the nationally televised game so they will be ready to play the awful Lakers on Sunday.

The decision didn’t sit well with the league and the ABC crew, including Jeff Van Gundy and Mark Jackson, who gave their two cents on the topic.

“If this was any other business, it would be a prosecutable offense — this type of bait-and-switch maneuver that the NBA allows its teams to pull,” added Van Gundy, “and quite frankly, if you look at the athletic performance teams, these groups that are supposedly preventing injury, when I look at the Cleveland Cavaliers, they’ve been injured all year, so how good are they doing at what they say the can accomplish?”

Some fans will think JVG is overreacting with his prosecutable offense comment but he’s right. If most companies pulled a bait and switch with services, products or ingredients of a product that has been marketed a specific way, a class-action lawsuit would be coming their way. That’s not going to happen here but I do believe NBA fans deserve a refund. I’m not just talking about ticket buyers. I’m talking about people who bought league pass thinking they were going to see a certain amount of games of their favorite players and teams. People, who juggle 9-5 jobs (making less in a year than most NBA players during a rested game), raising a family and trying to find time and money to get a better education so they can make a better living.

For the average hard-working fan with responsibilities in life, finding almost four hours in a day to watch a basketball game is also a challenge. And for these same people, buying tickets to a game and adding in the cost for parking and drinks can easily turn into a very costly purchase. So it is a big slap in the face and wallet of these fans when teams rest players like they did this Saturday and last Saturday.

You can come back with arguments about winning a championship and how many minutes one specific individual has played for a certain amount of months in a year all you want. The NBA is a global business with no off-season and it’s dependent on hundreds of players, many that will never make the playoffs or see past the first round . It’s a business that needs happy fans in 30 arena seats watching their favorite players play; happy fans watching televised games on multiple channels with lots of commercials; happy fans buying league pass and watching as many games as possible; happy fans buying merchandise with images of their favorite players who play in games they are scheduled to play – not rest for games that may or may not even happen on a day the fan may or may not be able to watch.

If you disagree with what I’m saying and aren’t related to a NBA player, I bet one day you will change your mind. If you agree with me and don’t have a job to run off to or some family obligation to attend, then please watch this video of Jalen Rose explaining how the emphasis on championships made this resting nonsense acceptable.

And here’s the perfect companion piece to the Jalen Rose commentary: the great, unappreciated and ringless Karl Malone talking about players resting. The Mailman played all 82 regular season games in nine of his 19 seasons and over 80 in 15. 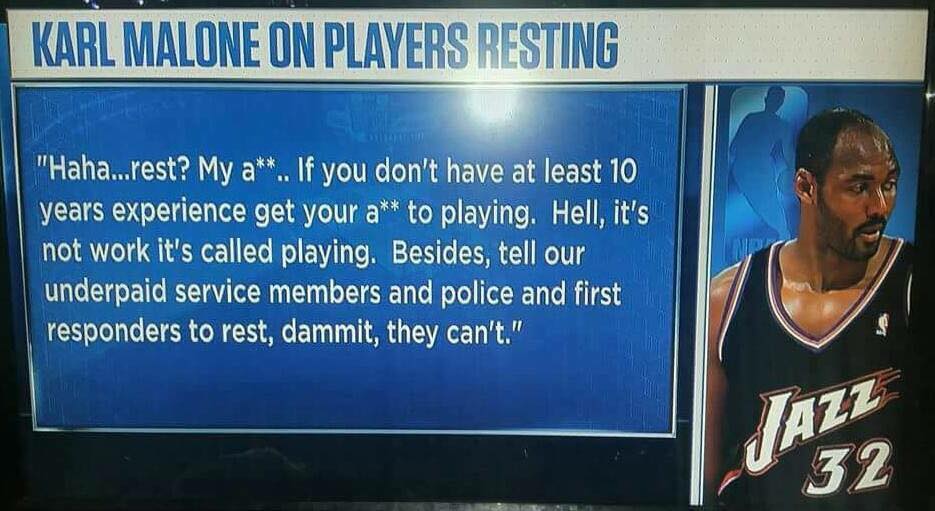