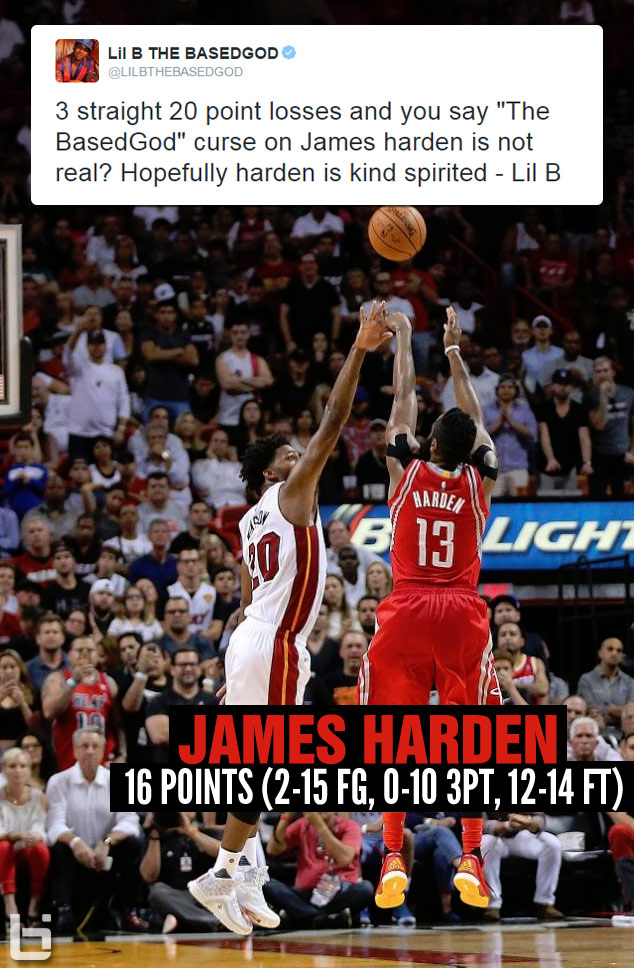 Sorry. We are still talking about Lil B and his curse on James Harden. We thought we were done during last year’s playoffs (remember Harden missing 9 of 11 shots & committing 13 turnovers in GM5 against the Warriors with Lil B in attendance?), but on Sunday, after James Harden was 0 of 10 from downtown and the Rockets blew a 21 point lead, lost by 20 and became the first team in NBA history to start the season off with 3 straight 20 point losses, we have to blame somebody or something unexplainable. That’s where Lil B and The Based-God curse comes (back) in even though Lil B told Sportsnation after the playoffs the curse was removed from the Beard.

“I’m just shooting my shots that I normally shoot,” Harden said after the game. “I’m not really trying to think about it too much. As good a shooter as I am, I’m going to have struggles throughout the season. Obviously, (coming in) the first couple games, it’s tough. Just stay with it. Stay in the gym and always have confidence in myself.”

“It’s not James,” Rockets coach Kevin McHale said. “It has nothing to do with James. It’s our team.”

And maybe it’s because of a certain internet troll too? No, it’s not, but then again, how else can you possibly explain this start for the Rockets?