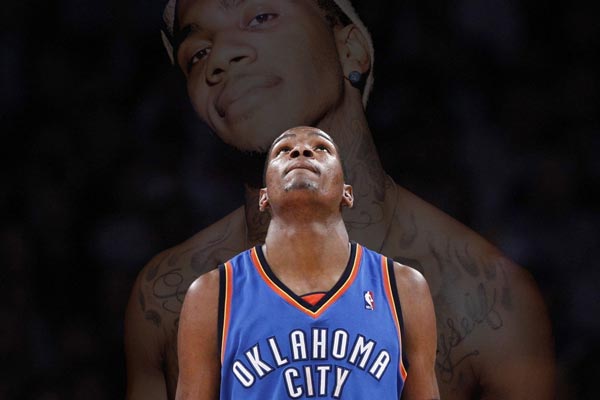 We’re all pretty familiar with the ‘Based God” curse on KD.  The two had “Twitter Beef” back in the day.  Now with Durant headed to the Bay to join forces with Steph, DG, & Klay, it seems like Lil B has lifted the so called “Based God Curse”.  Lil B even penned an open letter to KD, expressing how he felt when Durant signed with the Dubs’ & he even dropped some insight on how his game is coming along.

I still don’t think it really has set in, but Kevin Durant to the Golden State Warriors felt very natural — what it was supposed to be. It felt so right.

The Based God always works in very different ways. Me being Lil B, I don’t want to say it was super unexpected, but it was amazing. The Based God understood. I know The Based God definitely knew and had it foreseen.

Kevin Durant’s decision said a lot of things. I definitely commend him for being brave, for trying something new. Making new things happen. Making things happen that people wouldn’t normally think is conventional. He did something that was very brave, I think, and showed he does feel something. A lot of questions were answered.

I want him to hang out with the people of the Bay Area. Have fun. Listen to the music. Get a feel of everybody around. Different places. Feel the welcome. People are so excited to see him play and be a part of a Bay Area team.

Our one-on-one game still has to happen. I think it’s for the love of the sport. The world wants to see it — hundreds of thousands, millions of people. They want to know what would happen with this game. They’re obviously interested.

At this point, I like where I’m at right now with my game and how much better I’ve gotten. I’m a real defensive guy. My defense really speaks loudly, which rolls over on offense. I have a pretty decent midrange shot. I like getting to the rack. I like getting to the hoop. I’m kind of like Russell Westbrook, but I can’t dunk. Just as far as going to the hole. I’m not saying all aspects of Russell Westbrook’s game because I don’t have the same aspects. I’m coming to the court with a lot of confidence now. It’s definitely different. I definitely do think I’m ready to play KD. Winning, who knows? But I definitely know I am ready to play him.

When he wants to talk about it, I know I’m more than happy to, with open arms and a lot of love. It’s just about playing a nice game of basketball, one-on-one, for the love of the game. But now, for me, it’s just about him focusing on the Warriors’ season. Focusing on winning, getting this championship. I’m really excited to see them play. He knows he’s home. Everybody knows he’s home.

No predictions right now from The Based God on how many championships the Warriors will win, but I don’t know about any other starting lineup that could potentially have more offensive firepower than these guys. This is going to be a really exciting season.

Welcome home, KD. Welcome home. Keep going, my brother. Stay positive. We love you in the Bay. We’re excited to see you play. Definitely look out for me courtside. — Lil B