James Harden had the worst game of his career on Wednesday as the the Golden State Warriors eliminated the Rockets in GM5 of the WCF.  He missed 9 of his 11 shots from the field, all 3 of his 3-pointers, had as many fouls as assists and set a NBA playoff record for turnovers with 13! The 13 was 3 less than the entire Warriors team.

So what’s the explanation for Harden having more turnovers in one of the biggest games of his career than he had in the first 4 games of the series combined?  One man. A Rapper. Not Kanye who was in the crowd. Not MC Hammer who was also in the crowd. But this man….

It’s rapper Lil B, who lifted his curse off of Harden’s former teammate, Kevin Durant, and placed it on James earlier in the series. Most people thought the curse was a fluke after James dropped 45 points in GM4 but what happened was the curse wasn’t strong enough to get through the severe storms that flooded the city on that night. So the rapper personally showed up to GM5 to make sure the curse would be at it’s strongest.

Evidently the curse was in full effect and worked right up to the end when Harden shot an airball with a minute left in the game.

After the game, Lil B thought Harden learned his lesson and asked for the curse to be removed.

I’m going to ask ” The BasedGod ” to lift the curse off James harden i think he gets it, world record for turnovers ?Leave him alone – Lil B 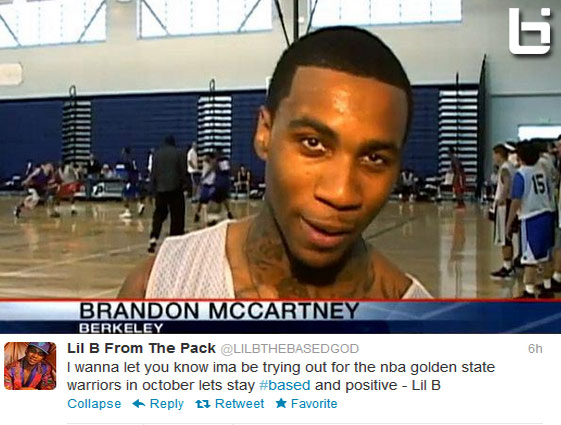 It’s ironic and pretty funny that the rapper who actually tried out for the Golden State Warriors D-League team 3 years ago, would be such a huge story in this year’s playoffs and actually getting some credit for the Warriors championship run now.

I’m assuming the Warriors will have him back for the home games in the finals but I think they should fly him to the away games in Cleveland too – even though Iman Shumpert already made peace with the Based God.