We all laughed earlier in the year when Paul George was on Jimmy Kimmel and read a mean tweet that said, “Personally I think Paul George could be traded for like hallf a bag of saltine crackers.” Everybody but Pacers fans laughed on Friday when the the Thunder traded Victor Oladipo and Domantas Sabonis for Paul George; I’m not saying Dipo and the son of a legend are saltine crackers but they aren’t exactly Ritz crackers and Paul George is a Ritz (with the best hairline in the league).

Even though OKC might just be a temporary one-year stop until George finally makes La La Land his year round residence, it led to a lot of excitement in OKC and one great tweet from their police.
[twit id=”881033274620952576″] 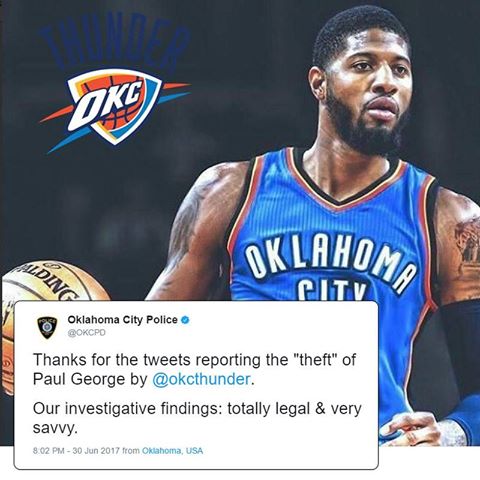 This is also a good time to revisit George dropping 45 on the Thunder last year.

And here’s some serious talk about George and the trade.