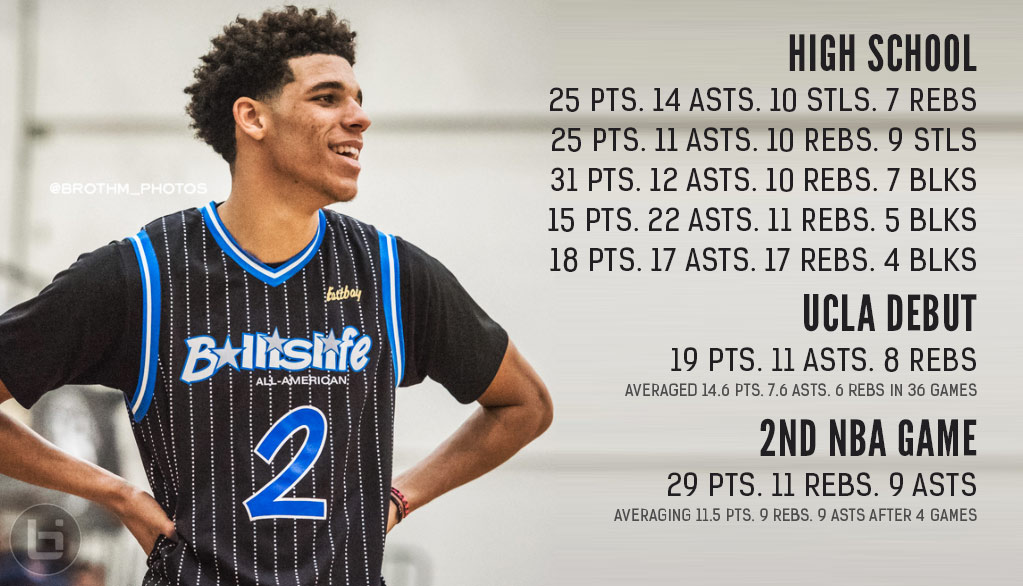 Lonzo Ball was one assist shy of a triple-double in his second NBA game. He was two boards and two points away from the statistical achievement in his third. And after just four highly publicized games in the NBA, the Lakers rookie point guard is averaging an impressive 11.5 points, 9 rebounds and 9 assists.

Just for kicks, here’s Jason Kidd’s rookie numbers after four games: 10.8, 9.5 rebounds and 7.8 assists. The 90’s King of Cali point guards was nicknamed Ason Kidd during his co-NBA Rookie of the Year season because “he didn’t have a J,” didn’t pick up the first of his 107 career triple-doubles until his 68th game (he had three more in his next nine games). Kidd is also 8th on the all-time leaders in made three-point goals, so this might make you feel a little better when you look at Lonzo’s 31% from the field and 23% from three right now.

In the meantime, I wanted to use #FlashbackFriday and his 20th birthday to look back at all of the times the former Ballislife All-American MVP fucked around and got one or almost got one (or a quadruple-doubles) during his days at UCLA and in high school, where he averaged 24 points, 11.3 boards, 11.5 assists and 5.1 steals a game as a senior and 24/11/9 as a junior.

2 boards short of a triple-double in his college debut

29 points, 11 rebounds and 9 assists vs the Phoenix Suns