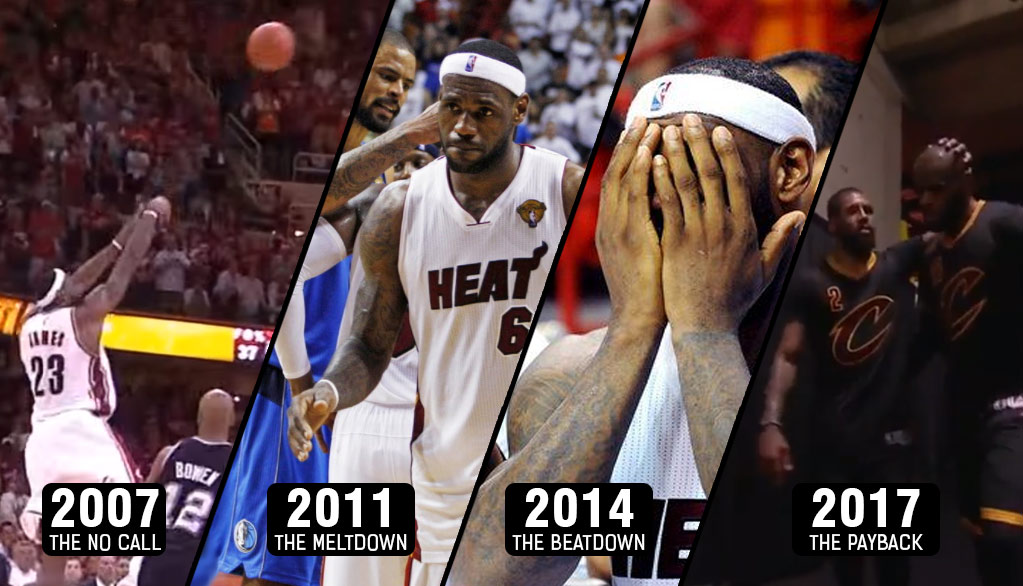 On June 12th of 2018, there’s a good chance LeBron James will be playing in another NBA Finals game. And if he is, no matter who he is playing against (I don’t care if he’s playing a Warriors team with a suspended Draymond and Mike Callahan is reffing the game), you should put the house on the opposing team!

After losing Game 6 of the 2017 NBA Finals on Monday, the King now has a record of 0-5 on games played on June 12th. You might be thinking this is just another stupid ESPN stat but the losses on this day are a lot more important and painful to LeBron than you might initially think.

After 37 years, Cleveland finally got to host a NBA Finals game. And their fans got to witness one of the lowest scoring Finals games in history: 75-72.

Besides holding the Spurs to 75 points, they also managed to hold Tim Duncan and Ginobili to a total of 17. 22-year-old LeBron scored 25 but missed 14 of his 23 shots. He was also criticized for still playing too unselfish and giving the ball up during crunch time to players like Anderson Varejao, who missed a big layup in the final 13 seconds.

“I was definitely going to get it back from Andy, but Andy made a good move,” James said after the loss. “He just over shot it. I wanted to try and get a better look, but it was just miscommunication.”

The game ended with a controversial no-call on Bruce Bowen as LeBron attempted a potential game-tying three at the buzzer. The replays clearly showed Bowen hanging on LeBron as he was pulling up for the shot.

This is the game LeBron credits for making him the player that he is now.

The Heatles were the heavily favored team going into the Finals against Dirk and the Mavs. It was supposed to be the first of “not one, not two, not three, not four, not five, not six” championships. What it turned out to be is one of the biggest disappearing acts by a NBA superstar in the Finals ever.

After two straight losses and the team being down 3-2, LeBron put up a mortal-looking 21 points, 6 assists and 4 rebounds in a 105-95 loss. His frustration was evident as he addressed “his haters” after the end of the game and series.

“All the people that was rooting on me to fail, at the end of the day they have to wake up tomorrow and have the same life that they had before they woke up today,” James said. “They have the same personal problems they had today. I’m going to continue to live the way I want to live and continue to do the things that I want to do with me and my family and be happy with that. They can get a few days or a few months or whatever the case may be on being happy about not only myself, but the Miami Heat not accomplishing their goal, but they have to get back to the real world at some point.”

Here we go again is what everybody was thinking after the Miami Heat lost Game 1 to Kevin Durant and the Thunder. MVP LeBron did what he could, scoring a team-high 30, but Durant was better with a game-high 36 points, including a clutch 17 in the fourth quarter.

Thankfully for the Heat, everything went their way (thank you refs?) as the Heat won the next four games and gave LeBron his first NBA championship.

“They smashed us,” Said James after the Spurs gave them a 21-point beatdown in Game 4 of the 2014 Finals. “Two straight home games got off to awful starts. They came in and were much better than us in these last two games. It’s just that simple.”

LeBron had a game-high 28 points on 10-of-17 shooting but dished out just two assists because his MIA teammates were really M.I.A. Ray Allen had just 8 points off the bench and Dwyane Wade finished with 10 points on 3-of-13 shooting. The Spurs were led by Kawhi Leonard and his roto-friendly line of 20 points (7-12 fg), 14 boards, 3 assists, 3 steals and 3 blocks.

With the Spurs having a 3-1 lead, everybody knew the series was over because the idea of a team coming back from a 3-1 deficit in the NBA Finals is just ridiculous! Right?

One year after LeBron and the Cavs came back from a 3-1 deficit to beat the Golden State Warriors, they found themselves battling an improved Warriors team out for blood and revenge. A Warriors’ team that added Kevin Durant, who was also looking for some cold-dish revenge against LeBron for the murder of his 2012 Thunder team.

In Game 5, LeBron showed why he is the best player in the league with a game-high 41 points to go with 13 boards and 8 assists but Kevin Durant (39/7/5) showed he’s on the best team in the league as the Warriors delivered a fatality move to defending champs.

Here’s what LeBron had to say after the loss about Durant and championships.

“So like I said, having — getting that first championship for me was like having my first son. It was just a proud moment, something that you never, ever forget. And at the end of the day, nobody can — no matter what anybody says from now on in your career or whatever they say, they can never take away from you being a champion. That’s something that they are always going to speak about, about you. It may be like the last thing they may say, but they are always going to have to say that you’re a champion.”

And I’m willing to bet my house, car and maybe my Dog on LeBron winning another champioship before he hangs up the sneakers. With that said, the next time his team is playing on a June 12th, I’m breaking the piggy bank and betting on the opposing team.