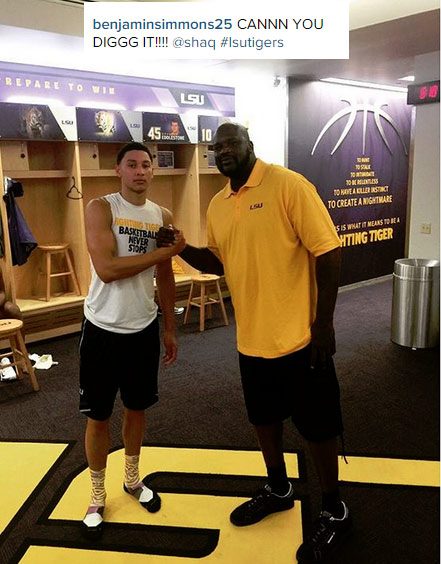 On Friday, future LSU great Ben Simmons got to meet LSU legend, Shaquille O’Neal. Simmons shared the moment on his Instagram page with the caption “cannn you diggg it!!!!!” referring to Shaq quoting the film ‘The Warriors’ during one of the Lakers Championship parades.

During a Nola.com interview, earlier in the day, Shaq – who has a 900-pound statue of himself at LSU and was inducted into the Lousiana Sports Hall of Fame in 2013 – was asked about his thoughts on Simmons.

”I haven’t seen him play. But daddy Dale (former LSU coach Dale Brown) says he’s the best thing since Chris Jackson. I said come on coach, Chris was the baddest ever at LSU. I’m going to check him out today (Friday).”

For those who don’t know about Chris Jackson (later changed his name to Mahmoud Abdul Rauf during his NBA career), I consider him the best NCAA freshman ever and the original unstoppable partner of Shaq – long before Penny and Kobe.

Jackson played two years at LSU but it only took 2 weeks for him to let the world know about his scoring ability as he scored 48 and 53 points in the first month of his college career.  His season high of 55 (with nine 3 pointers) came soon after against Ole Miss and he would go on to average 30 points as a freshman and set the NCAA freshman scoring record with 966 points. His averages would take a slight dip his sophomore season, dropping to 28 points per game, but his overall game continued to improve. He scored 40+ points 11 times, 50+ points 4 times and topped his 3 point barrage against Ole Miss by hitting 10 3 pointers against Tennessee.

As for Shaq, during his freshman year, he was mainly just a defensive player because of Jackson and “better center” Stanley Roberts. So Shaq played D and played it pretty well as he became the first SEC player to block more than 100 shots in a season and recorded two triple-doubles with blocks – how about a 17-year-old Shaq putting up 20 points, 24 rebounds and 12 blocks against Loyola Marymount?

Often fouled and double and triple teamed over his next season, Shaq would leave after playing 3 years at LSU and finished as the school’s 4th all-time leading scorer and 2nd in rebounds.

Shaq also became the 3rd LSU player to have at least 2 700+ point seasons at LSU. Pete Maravich and Chris Jackson were the other 2.  Let’s see if Ben Simmons can become the 4th.