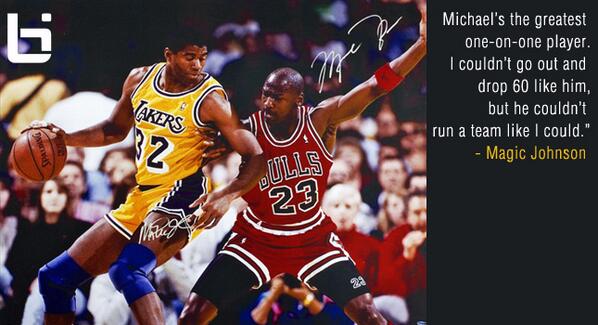 My opinion has been the same since the early 90s and didn’t change after Jordan won 6 championships.  Jordan is the GOAT and if I had a horrible to a mediocre team I would take Jordan over anybody in history for on and off-the-court reasons. But if I had a decent supporting cast or could start a franchise with any player in NBA history,  I would pick Magic Johnson without hesitation. The reason why is in the answer Magic Johnson gave to a group of 125 employees of the Dow Corning Corporation and 20 high school students from the area on Friday when asked “who would win in a game of 1-on-1 between you and Jordan.”

“Michael would win. That’s not my game. My game is assisting, setting up my teammates. Michael’s the greatest one-on-one player. I couldn’t go out and drop 60 like him, but he couldn’t run a team like I could.”

It took a long time until Jordan was able to “make his teammates better” or for the Bulls to find the right group of players and staff to surround MJ with so he and the Bulls could become winners but Magic was a leader and a winner that made his teammates better from day 1 of his rookie season that ended with a NBA championship.

Magic did credit MJ as a rival/player that did make his teammates better when talking about the importance of competition in the business world.

“Your rival can make you a better company. Bird and Jordan made their teammates better. The thing today is you have to over-deliver to customers. That’s what we do and we’re the No. 1 brand in Urban America.”

Earlier this year, Magic donated $123k to the Saginaw Promise, a college scholarship program for impoverished communities, and when the Dow Corning Corp donated $10k, Magic agreed to visit the company and speak to it’s employees and local students.

“I was just like you. Growing up poor doesn’t mean you have to have poor dreams.”