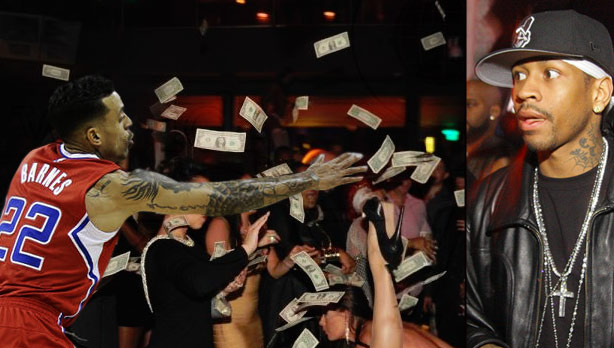 Is he broke or is he not? The question is about the Answer and we are talkin’ about finances. Not the game but the finances of Allen Iverson because of the game.

So what is the answer? The answer is Allen Iverson is not broke and not only is he not broke but he supposedly still receives a million dollars a year from an account he has that’s worth as much as $32 million – but he can’t touch the bulk of it until he turns 55.

The additional good news is he only has to “survive” on a million a year for 6 more years and then he will start getting his NBA pension money which will pay approximately $8,000 a month which means if he saves up his pension money then every 4 months or so he can go to a strip club and make it rain like the good ole days of when he was getting paid  up to $20 million a year.  This also means Matt Barnes can go out with him and pick up that money like he used to in the good ole’ days.

“Allen was the first guy that showed me how NBA players spend money in strip clubs. That guy went. HARD. He’d throw so much money, and this was when I was first in the league, that I used to take my foot and scoop the s–t under my chair and either re-throw it or put some in my pocket. He’d throw $30,000, $40,000 every time we went. I’m like, “You realize what I can do with this money?”

As wild as that may sound to you. It’s not as crazy as spending $1k a month on dry cleaning.  According to court fillings during Iversons’ divorce in 2012, AI was spending $10k a month on clothes, 10 on groceries and another 10 on restaurants.  Add another 330k on “misc expenses” and you have what AI was claiming his monthly expenses were back then.

If Matt would have known about all this, I’m pretty sure he would offered to pick up Iverson’s food and his clothes for him.