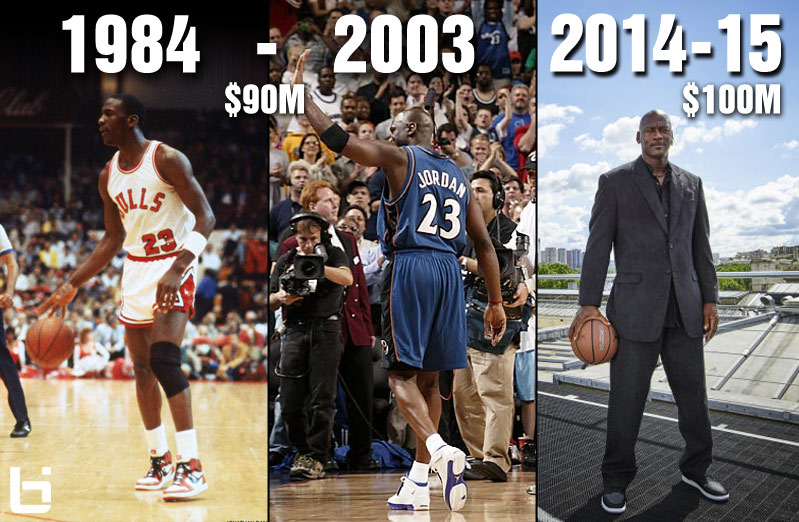 During Michael Jordan’s 15 year career in the NBA, he did enough on the court to earn him the title of THE GOAT. And according to Basketball-Reference, for his services he was paid a little more than $90 million, 63 of those 90 came between 1996-98, which means his Airness “only” made $27 million from the Bulls and Wizards during the other 13-years of his career. More shocking than that is his NBA salary never paid him more than $5 million a season during those 13 and he was paid less than $1.5 million by the Bulls in his first 2 seasons.

It’s safe to say Jordan wasn’t just the best player of all-time but the best steal and investment too. An investment everybody from Chevy, General Mills, Sara Lee, Wilson, Hanes Underwear and Ball Park Franks got behind. But the company that benefited the most from Jordan’s image was Nike, who originally signed Jordan to a deal which paid him about half a million a year.

According to an infographic by PBS.ORG, in the past year, the swoosh has put more money in Jordan’s bank account than the NBA did during his 15 year career.

“Jordan made more money selling sneakers ($100 million) than he did during his entire 15-year career ($94 million)” in 2014, making him the “highest-paid retired athlete in the world last year.”

If you adjust his salaries for inflation than that number will exceed $100 million but if you consider taxes, David Falk and other 3rd parties who took a cut off  his NBA contracts, then you might be looking at half (most likely more) of what he’s making pushing sneakers now.

Scariest things about those numbers, the $34 billion industry and the highest paid retired athlete is, there’s no reason why these numbers wont continue to rise. Yeah, it’s safe to say it’s Michael Jordan’s fault.