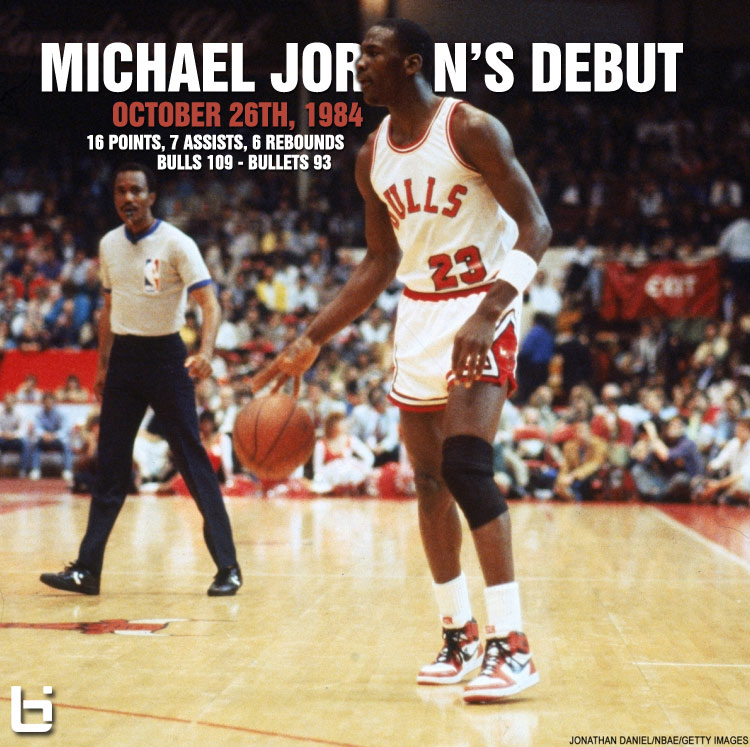 The Blazers passed on drafting him. Too bad for them. The Bulls unsuccessfully tried to trade his draft rights. Lucky for them all of their potential suitors didn’t want to part with a big man. So the Bulls ended up with Michael Jeffrey Jordan and on October 26th of 1984, at the old Chicago Stadium, the man who would become Air then God in sneakers and then the GOAT, laced up his Nike Air Ships and made his NBA debut: 16 points (5-of-16 shooting), 7 assists, 6 rebounds and one spectacular block in a 109-93 win over the Washington Bullets.

Only 16 points? Well, at that time, Orlando Woolridge still thought he was going to be the man in Chicago, took the most shots (19) and finished with a team-high 28 points and 9 rebounds. The Bulls’ Quintin Dailey — also not too fond of the Bulls keeping Jordan — matched MJ’s shot attempts and finished with 25 points.

Jordan’s first NBA game also gave Bulls fans a scary “this could be his last game” moment when Jordan tried to posterize 6’11 All-Star Jeff Ruland (around the 4-minute mark of the full highlights video below) during the first half. After laying on the ground for a while, Jordan got up and continued to attack the rim for the rest of the game.

It didn’t take long for Jordan to start putting up more shots and a whole lot of points. In Jordan’s second game, he scored 21 points, although his most memorable moment from the game was shooting an airball three at the end of regulation. He bounced back strong with 37 points and 9 more shots than Woolridge in his 3rd game. His first 40 point game came during his ninth when he dropped 45 on the Spurs. He finished his Rookie of the Year campaign with seven 40+ point games and 35 games with 30+.

As for the rest of his career, he played pretty well and also found some success off the court too.

As for those Nike Air Ship sneakers, in 2015, a pair sold at an auction for $71,554. You can hear the story about the sneakers and how a ball boy ended up with them in the following video.