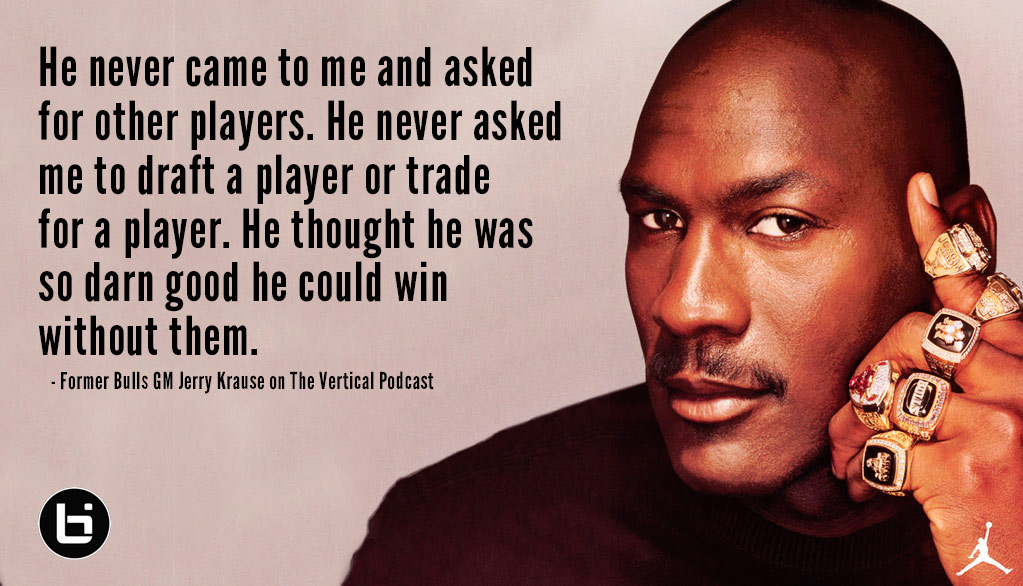 Do you remember in 1986 when Michael Jordan dropped 63 in a losing effort to the Boston Celtics and then asked management for help? You don’t because he didn’t. What he did do was return the next season and average 37 points a game.

Do you remember when the Bulls lost three years in a row to the Bad Boy Pistons and Jordan asked management for help? You don’t because he didn’t. What he did do was lead his Bulls to a sweep of the Pistons in 91 and went on to win the first of three straight NBA championships.

Do you remember when Jordan came back from his baseball stint and was embarrassed by the Orlando Magic in the 1995 playoffs and then asked for help? You don’t because he didn’t. What he did do was lead the Bulls to a 72-10 season, a sweep of the Magic in the playoffs and the first of three straight NBA championships.

But he didn’t win without Pippen and Horace Grant right? In a recent must-listen episode of Adrian Worjanowski’s The Vertical Podcast, former Bulls GM Jerry Krause shares a bunch of great stories about Michael Jordan and creating the dynasty Bulls team without consulting The Goat on draft selections and trades.  One of the best soundybytes from the conversation was when Krause said Jordan never came to him asking for help.

Krause also said Jordan could have been as good as Willie Mays if he would have stuck with baseball and told a great story about an injured Jordan being told his bloody and puss-filled foot was going to keep him out for two-weeks, not caring and dropping 55 on the next night (that’s not exactly what happened but I’ll explain in another post).